This has been a seesaw affair, with the teams winning one and losing one on each other's home ice. The Islanders rebounded from a 2-1 overtime loss in Game 3 at the Nassau Veterans Memorial Coliseum with a thrilling 4-1 win as moderate underdogs in Game 4. That leveled the series 2-2, setting up what is essentially a best-of-three set, with two of the games scheduled for Boston.

After rookie Ilya Sorokin was tattooed by the Bruins in Game 1, head coach Barry Trotz went back to Semyon Varlamov in Game 2. He has won both of the even-numbered games, and he was on the short end of a 2-1 overtime loss against the B's in Game 3.

Boston actually led Game 4 when David Krejci notched a goal on the power play at 3:57 of the second period, but Kyle Palmieri quickly answered to level the score. That was his fifth goal of the postseason, as the acquisition from the New Jersey Devils at the NHL trade deadline continues to pay huge dividends. After emerging from the room for the third period, it was all Isles.

The score from Game 4 looked worse than it was, however. Mathew Barzal scored for the second straight game, and his goal at 13:03 stood up as the game-winning goal. Casey Cizikas, the Game 2 hero, and Jean-Gabriel Pageau notched empty-net goals to make the game look worse than it was.

The goal by Pageau was especially angering for anyone who bet the UNDER, which was five at most shops. There were three total goals on the board with 1:03 to play. Cizikas' goal was fine, and looked like that might be all the scoring we'd see. But with just 3.4 seconds left, Pageau deposited one into the empty net, turning what looked like a certain UNDER into a push. Now, if you were holding an OVER ticket, it was a bit of euphoria. 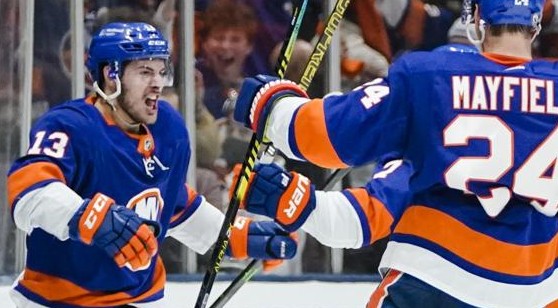 The New York Islanders have covered the +1.5 puck line in three straight games when facing the Boston Bruins. (AP)

The Bruins are looking to take the pivotal Game 5, but it's not a certainty. This series has been nip and tuck the whole way, and Monday's battle is going to be no different. The Islanders have covered the puck line in each of the past three outings, and catching a goal and a half looks like a wise play, as overtime in Game 5 wouldn't be shocking. In fact, it's expected.

Playing in Boston hasn't been great for New York lately, going 1-4 in the past five skates at TD Garden. However, one of those wins was in Game 2 in overtime. The trends show the OVER has been the play, going 3-1-2 in the past six meetings in Boston, including each of the first two games in this series. Expect a lot more defense and goaltending in this one, as the pressure and intensity is ratcheted up as the series treads on.