The English Premier League rolls on for another few weeks, and normally Thursday’s match between the top two teams in the table, Liverpool (28-2-1) and Manchester City (20-3-8), would be considered a titanic matchup.

However, with a handful of matchdays remaining, Liverpool has already wrapped up the EPL title, their first in 30 years, after Chelsea upended Man City by a 2-1 score last week. That waters down Thursday’s battle a little bit.

Still, Man City comes in with a plus-44 goal differential to plus-49 for Liverpool, so these two high-octane offenses and top-notch sides should put on a show at Etihad Stadium in Manchester. Man City might not have a title to play for anymore, but they’d like to erase the poor taste of a 3-1 setback to the Reds back on Nov. 10 at Anfield. 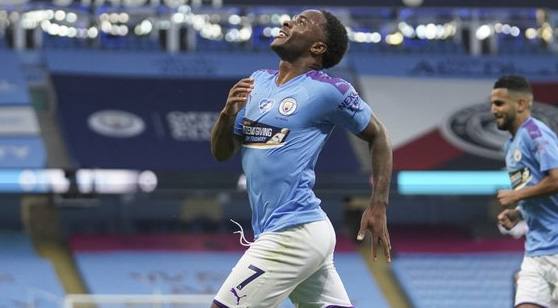 Raheem Sterling has scored 12 goals in the Premier League this season, but only three have come at Etihad Stadium. (AP)

Liverpool might have clinched the title, but they still have a chance to set the all-time EPL with 100 points in a season. You can met Man City, which set the record during the 2017-18 campaign, would like to deal that attempt a serious blow with a win on their home soil Thursday.

These clubs have been rather evenly matches against each other in recent seasons across all competitions. While Liverpool has won 35 of its past 38 matches against EPL competition, they likely still feel like they have something to prove against Manchester City, a side which has been a thorn for many years.

Plus, Man City is second in the table, there is a lot of talk about the Reds winning matches by ‘just’ one goal, or with late strikes, etc. A win by Liverpool in this one, especially a decisive win when not much else is on the line, will go a long way in securing their place in history, as well as potentially inching them closer to a record.

While the Reds have the title locked up, you can still expect to see their best lineup on the pitch. Manager Jurgen Klopp is expected to stick with his full arsenal of players when the Reds invade Etihad. While it’s possible the likes of Xherdan Shaqiri, who is dealing with a nick, might not be able to play, they’ll still have their full assortment on display.

Man City lost a huge chunk of their offense when Sergio Aguero went down last week to an injury Pep Guardiola said does not look good, and with it a lot of their scoring just disappeared overnight.

Each of these sides have been among the best offensive clubs in the EPL. But Liverpool likely won’t have as much incentive to drive the ball down the field and push things to the limit with a title racked up. Yes, they’re playing a record still, and Klopp wants his side to keep good form all the way to the finish line, but you can’t help but think they’re going to let up some.

And Man City lost their leading scorer Aguero, and they have struggled to find the back of the net in two games since his departure. They netted a lone goal in a 2-1 loss to Chelsea, and two in a clean sheet victory over Newcastle United in the FA Cup.

Playing Under 2.5 goals (+145) is risky business with two offenses like these normally, but might be a nice payday given the circumstances.

You have to go with the two big guns on each side here. Salah (+180) has been amazing this season, banging home 17 goals to pace the Reds. Salah scored in the 13th minute of the first match against Man City earlier this season.

For the home side, look to Raheem Sterling (+185), who is now the leading scorer for Man City with Aguero recovering from serious injury. Sterling has tickled the back of the net on 12 occasions this season.