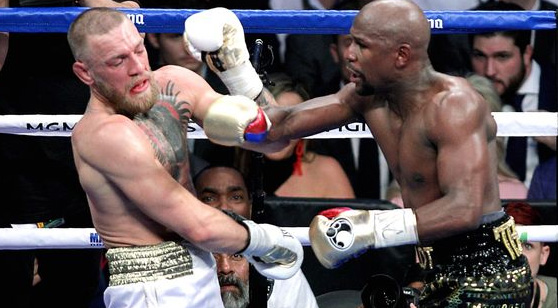 Floyd Mayweather Jr. defeated Conor McGregor in 2017 and many pundits believe the pair could meet in the square ring again. (AP)

Boxer Floyd Mayweather Jr. hasn’t fought since 2017 when he improved to 50-0 with a defeated UFC superstar Conor McGregor with a 10th round technical knockout victory.

With that victory, Mayweather set the boxing record for the longest active unbeaten streak in a professional career at 50–0.

His nickname Money was proven again in the fight versus McGregor as Mayweather reportedly earned over $300 million from the fight against the UFC star.

Whenever an upcoming boxing contender starts to get noticed, Mayweather's name always gets mentioned as a possible opponent even though the 43-year-old fighter hasn't fought in three years.

Douglin recently shared a grueling 2:00 a.m. session with the legendary boxer and he believes Floyd will fight again and that he can still hang with world-class fighters.

He also suggests that Floyd chose to spar him southpaw in preparation for fights against two possible UFC opponents.

One would be the aforementioned McGregor and the other would be Khabib Nurmagomedov, who is currently the UFC lightweight champion.

Douglin recounts his middle-of-the-night sparring duel with the legendary Mayweather.

Could we see Floyd back in the ring?

Floyd’s Uncle told us he could fight Connor McGregor or Khabib - is that possible?

How did the spar go?

While Douglin believes Mayweather is ready to fight and be very competitive, what do the oddsmakers think of the Mayweather’s chances?

William Hill, a major global operator and in the US, has provided some markets and other betting shops have followed their lead.

Listed below are potential fights for Mayweather and consensus money-line odds on those bouts.

If the two were to meet again, Mayweather would be a 1/10 favorite while McGregor would be a 6/1 underdog based on the hypothetical consensus odds.

And for the MMA fans at VegasInsider.com, it should be noted that if the odds would be completely reversed if the two combatants ever met in the UFC octagon. McGregor (-2000) would actually be a heavier favorite over Floyd (+900) and that shouldn't come as a surprise.

Some pundits would argue that Khabib Nurmagomedov is the best combat fighter in the world and it's hard to argue the facts against the UFC Lightweight Champion. He's 28-0 in his career but he's not a boxer, rather a mixed martial artist who focuses more on grappling than his stand-up game. He's currently scheduled to fight Justin Gaethje on October 24, 2020 at UFC 254 for the lightweight championship.

Similar to McGregor's experience in the octagon, Khabib would be a heavy favorite (-1000) if he ever faced "Money" in the cage. Mayweather as an underdog seems intriguing at 6/1 odds but he would have no chance.

And for the MMA fans at VegasInsider.com, it should be noted that if the odds would be completely reversed if the two combatants ever met in the UFC octagon. McGregor (-2000) would actually be a heavier favorite over Floyd (+900) and that shouldn't come as a surprise.

For the fight fans that want to see Mayweather fight a real fighter, a boxer, the oddsmakers have posted odds on a couple potential bouts against veterans.

Mayweather never fought Broner but he did beat Manny Pacquiao by a 12-round unanimous decision in 2015.

Pacquiao aka "Pac-Man" continues to remain active, fighting six times since the loss to Mayweather and he's posted a 5-1 record in those contests and the maybe believe he was robbed in the lone loss. His last result came in 2019.

One of those wins for Pac-Man came against Broner, which was a 12-round unanimous decision on Jan. 19, 2019.

Listed below are the consensus odds for Mayweather versus each fighter, much tighter than his UFC opponents. 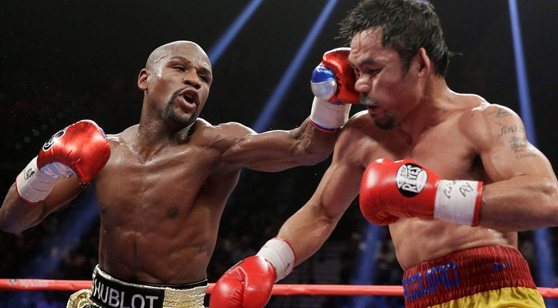 Oddsmakers believe that the toughest return fight for Mayweather would be a rematch against Manny Pacquiao. (AP)

Fury afraid of being ‘disowned’