The Penn State Nittany Lions host the Maryland Terrapins in a crucial March Madness bubble game for the latter. Tip for this Big Ten game is set for 7 p.m. (ET) and will air on FS1.

WHERE TO BET MARYLAND-PENN STATE

The Penn State Nittany Lions enters as a -3-point home favorite against Maryland. The Nittany Lions are split on the spread with a 7-7 ATS, while Maryland has failed to cover the spread in 10 of 17 games this season.

The point total is set at 144.5, which Maryland tends to go OVER on. Maryland has gone OVER in nine of 17 games this season, while Penn State is split at 7-7. 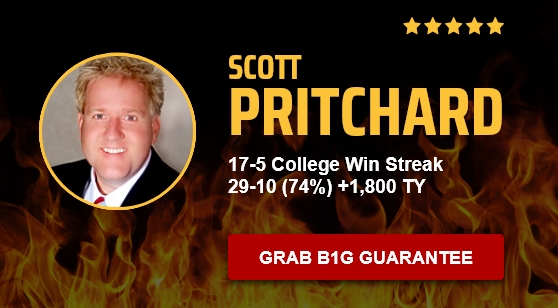 This is a must-win game for Maryland, trying to break their way into March Madness as a current bubble team. Penn State is no small task, but Maryland has seen a handful of quality road wins this season.

Although Maryland is 3-4 on the road, the Terps have seen wins against Wisconsin, Illinois and Minnesota - where almost nobody but the Golden Gophers win. The Terps now enter a must-win game after defeating Purdue by one at home. Aaron Wiggins has really stepped up on offense, one of the team's leading point scorers.

Wiggins has been money his last two games, scoring exactly 18 points against Wisconsin and Purdue. He has also seen two double-doubles over his last three games. Donta Scott leads the team in rebounding though, and averages just 0.1 points below Wiggin's 12.8 total.

Eric Ayala is the top threat for Maryland on offense though, averaging over 13 points per game including 16 or more in two of his last three games. Maryland's offense is efficient, despite not scoring a ton of points per game (averages 70.8 which ranks 203rd).

The Terps shoot high percentages from the field, the main reasons for holding the nation's 94th-most efficient offensive rating. They don't take a lot of shots however, and although the defense allows 66.7 points per game the Terps don't get a lot of steals. Maryland averages 4.9 a game which ranks 307th in the nation.

Penn State is a grind to face, one of the most physical teams in the nation that plays the toughest strength of schedule. Despite how physical this team is with players like John Harrar and Seth Lundy, they defense gives up a lot of points.

Playing Big Ten offenses will do that, but the issues are a bit more. Penn State only averages 2.6 blocks per game, which ranks 245th nationally. Also, they post a defensive efficiency rating of 106.5 which ranks 302nd out of 347 schools. They also only grab 23 defensive boards per game, and that ranks 318th in the nation.

They rebound on offense well, mainly attributed to Harrar. They also shoot the ball pretty efficiently from three-point range. The Nittany Lions connect on nine three-pointers per game (ranks 48th) on 25.1 attempts per game (ranks 58th), which gives them a 35.8% shot from beyond the arc (ranks 84th).

This offense is one of the more 'assigned' college basketball teams in the entire nation, each player playing a specific role and knowing how to attack on every single night. The issue, though, is the defense. Penn State is allowing more points than they are scoring, which is impressive (for all the wrong reasons) because the offense scores the 91st-most points per game in the nation.

Penn State has won three straight home games, all against solid teams. It's easy to see why oddsmakers like the Nittany Lions at home, so the chalk bet here is fine. Of the two markets the point total does seem better, as Penn State to win SU as a plus-value live bet seems like a better way to approach the Nittany Lions winning rather then taking the spread.