The No. 3 Michigan Wolverines return to action this Sunday in a Big Ten showdown against the No. 21 Wisconsin Badgers. Game time from Kohl Center is scheduled for 1 p.m. (ET) on CBS.

Sunday’s Big Ten showdown has been opened as a pick em. The betting line for the total has been set at 131.5 points.

The Wolverines’ last game was a 17-point road win against Purdue on Jan. 22. Their lone straight-up loss in 14 games this season came against Minnesota on Jan. 16. They're 11-3 against the spread in those 14 games. The total stayed UNDER in seven of the last 11 outings.

With an earlier 22-point win at home against Wisconsin, Michigan is 5-2 SU in the last seven meetings and 7-3 ATS over the last 10 matchups. The total has stayed UNDER in three of the last four games between the two.

The Badgers are 3-3 both SU and ATS over their past six conference games starting with a home loss to Ohio State on Jan. 23. The total has stayed UNDER in seven of their last nine games.

Wisconsin had been unbeatable at home in recent seasons but it is 5-2 SU at home in Big Ten play this year while going 3-4 ATS. 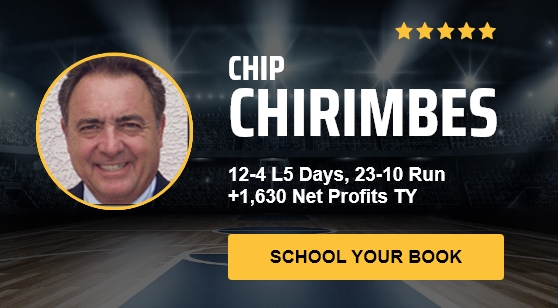 The rust factor is putting things mildly for a team that has not played a game in more than three weeks. However, this was one of the hottest teams in the nation at that time.

Center Hunter Dickinson leads the Wolverines in both points (15.1) and rebounds (7.2). Forward Isaiah Livers is a close second in scoring with 14.6 points per game and guard Franz Wagner is pulling down 7.1 rebounds.

The defense held opposing teams to 66 points or less in five of its last six games. The season average for points allowed is 65.4.

Wisconsin was not at its best on Wednesday night but it was still good enough to get past Nebraska by 13 points as an 11-point road favorite.

Senior guard D’Mitrik Trice was held to nine points in that last outing as the team’s leading scorer with 13.5 PPG. Forward Micah Potter is next on that list with 11.8 points while pulling down 6.1 rebounds a game.

The Badgers’ scoring average this season is 70.8 PPG with a 43.2% shooting percentage from the field. They are shooting 35.9% from three-point range.

This defense has not allowed more than 56 points in each of its last five wins. Yet, that average balloons to 76.7 points in the last three losses over the eight-game stretch.

The big question on Saturday is can Michigan pick up where it let off? Inconsistencies with Wisconsin over the past three weeks is another aspect of this matchup that needs to be taken into consideration.

While the second meeting this season should be closer than the first, I have the Wolverines maintaining form after the long layoff to win this game SU I'll go with the UNDER on the total line for Saturday’s game. There could be enough rust with Michigan’s shooters to keep the total scoring lower than expected.

WHERE TO BET MICHIGAN-WISCONSIN