In a featured Big 12 showdown on ABC, the No. 13 West Virginia Mountaineers will be on the road against the No. 12 Texas Longhorns at Frank Erwin Center. Saturday afternoon’s tip is slated for 3 p.m. (ET).

Texas gets the early nod in this one as a three-point home favorite. The betting line for the game’s total has been set at 147.5 points.

West Virginia slipped to 7-4 straight-up in Big 12 play with last Saturday’s one-point loss to Oklahoma as a four-point favorite at home. It is 2-3 against the spread over its last five outings with the total going OVER in the previous six games.

The Mountaineers lost to Texas by two points on Jan. 9 as 1.5-point home favorites. They are 1-5 SU and 2-4 ATS in their last six games against the Longhorns. The total has gone OVER in two of the last three meetings.

Texas moved to 7-4 SU in conference play with recent wins against Kansas State and TCU. It is 3-8 ATS in the Big 12 with the total going OVER in nine of those 11 games. The Longhorns have lost three of their last five home games SU and they have failed to cover in seven of their last eight games played on their home court. 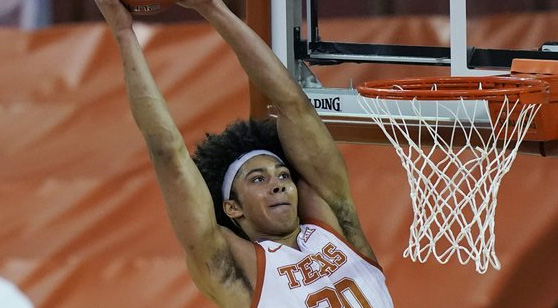 Texas barely got past West Virginia in their first meeting on Jan. 9, earning a 72-20 road decision. (AP)

West Virginia has had a week to stew over last Saturday’s double-overtime loss at home to Oklahoma. This was a game it let slip through its hands.

Sophomore guard Miles McBride scored 19 points in that game and he has now exceeded his team-high scoring average of 16.2 points in his last three starts. This includes 29 points in a big home win against Kansas on Feb. 6.

The Mountaineers have four players averaging 12 points a game as part of a team-scoring average of 77.5 points. They are shooting 43.1% from the field and 36.9% from three-point range.

Under the boards, this team is averaging 39.3 total rebounds a game. Going back to a Jan. 25 win against Texas Tech, West Virginia has allowed at least 71 points in its last six games win or lose. The season average for points allowed is now 71.9.

Texas got a big effort from Andrew Jones in last Saturday’s win over TCU with 19 points. This has been a regular occurrence with the junior guard averaging 15.9 points per game. He has now exceeded that average in each of his last four starts.

Guards’ Courtney Ramey (13.2 points) and Matt Coleman III (12.7 points) are next on the list. Coleman is one of the Longhorns’ best shooters with a 46.5 field-goal percentage. Texas has averaged 75.3 PPG on the year while pulling down 39.8 rebounds. It is shooting 44.7% from the field with a 33.9 shooting percentage from outside the three-point line.

Defensively, the Longhorns are holding opposing teams to 67.6 PPG this season. However, they have allowed 75 points or more in four of their last five games.

The first meeting in West Virginia was a two-point game in the Longhorns’ favor and I'm expecting Saturday’s contest to remain tight as well to the final buzzer. That being said, I'm going to take West Virginia on the money line with the SU upset.

Texas has not always played its best ball at home this season. Along with a tight spread on the scoreboard, I expect each of these teams to try and outscore one another as opposed to playing defense. That should take the total well OVER the current line.

WHERE TO BET WEST VIRGINIA-TEXAS