In the backend of a home-and-home series, the No. 7 Oklahoma Sooners head to Gallagher-Iba Arena this Monday night to face the rival Oklahoma State Cowboys. Game time on ESPN is set for 9 p.m. (ET).

The second meeting in three days between these two in-state rivals has been opened as a pick em. The betting line for the total this time around is set at 141.5 points.

The Sooners lost Saturday’s series opener 94-90 straight-up in overtime as six-point home favorites. This followed a five-point road loss to Kansas State as 10-point favorites in their previous outing. They are 1-4 against the spread in their last five games with the total going OVER in three of the five outings.

Oklahoma has now lost four of its last seven games against Oklahoma State SU and ATS. The total has gone OVER in the last three meetings.

The Cowboys have won their last four games SU while covering ATS in four of their last six contests. The total has gone OVER in five of their last eight games. They are now tied with Oklahoma at 9-6 SU in Big 12 play.

Oklahoma State has a SU five-game winning streak at home while going 4-1 ATS. The total has gone OVER or ended as a PUSH in nine of its 12 home games this season. 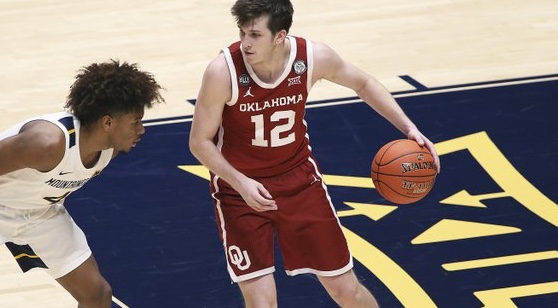 Austin Reaves will look to help the Oklahoma Sooners avenge an overtime loss to Oklahoma State, losing 94-90 on Saturday. (AP)

Oklahoma look a seven-point lead into halftime of Saturday’s matchup but it was outscored by 11 points the rest of the game. Guards’ Austin Reeves and De’Vion Harmon combined for 45 points in the losing effort.

Reeves leads the Cowboys across the board this season with 17.5 points, 5.6 rebounds and 5.1 assists. Harmon is second on the list in points per game with 13.0 and guard Umoja Gibson is averaging 10.4 PPG.

The defense allowed 72 points or more for just the third time in the last seven matchups. The Sooners’ points-allowed average this season is 68.6.

Oklahoma had no answer for freshman guard Cade Cunningham on Saturday afternoon. He ended the game with a career-high 40 points. Oklahoma State’s top scorer is averaging 19.8 PPG while shooting 45.3% from the field and 43.2% from three-point range.