A huge March Madness bubble bursting game in the Big East sees the Seton Hall Pirates taking on the St. John's Red Storm. Tip for this conference clash is set for 7 p.m. (ET) and will air on FS1.

Although many books have seen St. John's move to a -1.5-point favorite, Seton Hall actually opened as a -1-point favorite. The first piece of advice before continuing this preview is to shop for your line.

The Red Storm score a ton of points, and have gone OVER in 15 of their last 25 games. Seton Hall, however, has gone UNDER the point total in 13 of its last 24 games. 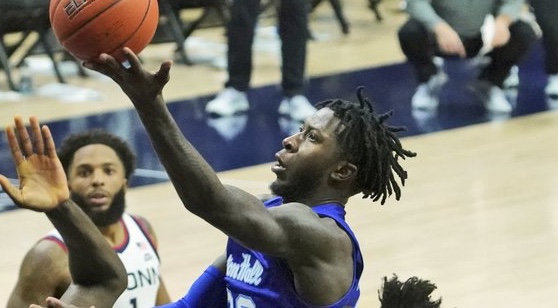 The Seton Hall Pirates visit the St. John's Red Storm in a March Madness bubble game, a must-win for both schools. (AP)

The Pirates need to win this game, along with making the Big East Tournament Championship to make March Madness at this point. The Pirates have dropped three straight games after winning four in a row. The losses have come against Georgetown, Butler and UConn - only the last one being an excusable loss.

The Pirates have failed to touch 59 points in two straight games as well, so the offense needs to pick up. Sandro Mamukelashvili leads the team in points per game, with Jared Rhoden and Myles Cale not far behind.

They also block shots very well, ranked 44th in the nation with 4.3 per game. Ike Obiagu averages 2.8 per game, the main reason for the Pirates dominance in that category.

What's odd about the Seton Hall line jumping over to St. John's with various books is that Posh Alexander is currently listed as questionable for the game. He is the second-highest scorer on the team, and leads the Red Storm in assists per game with 4.4.

Alexander is also crucial to the defense for St. John's, as it might suffer tremendously without him. Alexander averages a team-high 2.6 steals per game, which has helped St. John's average 9.2 per game which ranks ninth nationally.

With the fluctuating spread and the status of Alexander, be cautious of the point spread market. Keep an eye on Alexander's status. crucial to wagering this game. St. John's is led, however, by Julian Champagnie who averages nearly 20 points per game.

The trends point towards a St. John's victory, so if you can get the opening spread then grab it. If you can't, taking the small spread is still fine but definitely check Alexander's status for St. John's. If he's out, maybe fade the spread.

The Red Storm offense should touch 74 to 75 points, while Seton Hall's offense is struggling mightily. However, the Red Storm defense allows nearly 80 per game, so expect Seton Hall to be able to score much better in this game then they have been - also playing desperate.

WHERE TO BET SETON HALL-ST. JOHN'S