The SEC Tournament enters the semifinal stage on Saturday, as the Tennessee Volunteers take on the Alabama Crimson Tide. Tip for this SEC showdown is set for 1 p.m. (ET) and will air on ESPN.

Tennessee is coming off a solid win against Florida, now winning three of its last four games. Jaden Springer is the teams' leading scorer, while both

The main strength for this team is the defense though, allowing just 62.7 points per game. The Vols enter with a 91.6 defensive efficiency rating, which ranks 16th in the nation. 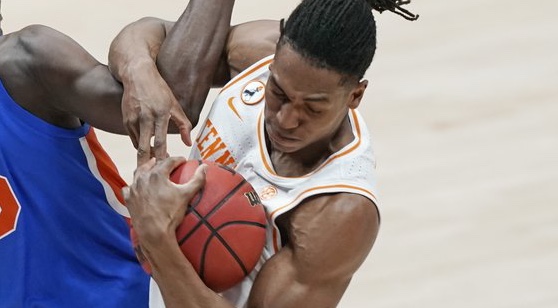 The Tennessee Volunteers lost to the Alabama Crimson Tide earlier this season, dropping the game at home 71-63 on Jan. 2. (AP)

Alabama handled Mississippi State easily in their first SEC Tournament game, as the Crimson Tide offense looks poised for a run. What else would you expect from Nate Oats and what he has brought from Buffalo? The Crimson Tide score buckets, and are not afraid to let it fly.

They score 79.6 points per game which ranks 30th in the nation, along with the nation's 24th-most efficient defense (92.9). Alabama features four players who score a double-digit point total, led by Jaden Schackelford. He and John Petty are the top two scorers, although Jahvon Quinerly isn't far behind with 12.3 points per game.

Alabama shoots the fourth-most three-pointers per game nationally (30.1) and connect on the fifth-most per game (10.7). They also rebound the ball very well, averaging 40.3 per game which ranks 11th nationally. Finally, their highly efficient defense stems from blocks and steals. They average 8.7 steals per game (ranks 17th) and 4.1 blocks per game (ranges 53rd).

Its difficult to go against Alabama's offense right now, scoring at a highly efficient rate (which is no surprise). The low point total should be taken advantage of, despite the schools going slightly UNDER more times than not. Alabama touching 75 should see the total clear, unless Tennessee's offense disappears - which tends to occur.

If Tennessee can't keep pace then Alabama should easily cover the given spread, so feel free to pair the two bets. Go OVER and count on Alabama's offense to produce. Taking Alabama to cover also wagers on the Crimson Tide offense without having to rely on Tennessee to score points as well.