Thursday’s late night college basketball betting action features a West Coast Conference clash between the BYU Cougars and the No. 2 Gonzaga Bulldogs at McCarthey Athletic Center in Spokane. Tip-off on ESPN2 is set for 11 p.m. (ET).

The Cougars moved to 14-3 straight-up on the year and 2-0 in conference play with last Saturday’s nine-point win at home against Saint Mary’s as four-point favorites. They also covered against Pacific in an 18-point win as 17-point favorites at home in the WCC opener. BYU’s lone upset this season came against Oregon in mid-November as 4.5-point underdogs.

Gonzaga continues to roll with a SU 12-2 record. The Bulldogs opened play in the WCC last Saturday by scoring 117 points against Pepperdine to cover the 30-point spread. Their two losses this season came against Duke and Alabama in games they were favored to win.

While the Bulldogs should be able to win and cover on Thursday night in front of the hometown crowd, I am looking for another big night on the scoreboard. They are not going to post triple digits against a talented BYU squad, but this matchup is not going to turn into a defensive struggle either. Look for the final score to exceed the current total to set up a winning play on the OVER.

Behind guard Alex Barcello’s 16.6-point scoring average, BYU is putting up 73 points per game. He is shooting 46.8% from the field while connecting on 46.7% of his team-high 90 attempts from three-point range. He is also shooting a solid 88.7% from the free throw line.

Guard Te’Jon Lucas is the next leading scorer with 10.1 points and he also leads the team in assists with 4.7 a game. Forward Fousseyni Traore is BYU’s leading rebounder with 7.8 of the 40.9 team total. The Cougars are averaging 11.7 rebounds a game on offense.

The team, as a whole, is shooting 44.4% from the field and 35.5% from outside the three-point line. At the other end of the court, the Cougars are giving up an average of 61.9 PPG.

Gonzaga has worked its way back up the national rankings with a SU five-game winning streak. This run includes a 14-point victory over Texas Tech as a 10-point favorite in the closest spread over those five wins. The Bulldogs are 3-1 ATS in their last four contests, but just 7-7 ATS overall. The total has gone OVER in their last two games with a combined 210 points on the scoreboard.

As the third-highest scoring team in the nation with 87.9 points a game, this lineup has four players averaging at least 11 PPG. Forward Drew Timme is at the top of that list with 16.8 points while adding 5.9 rebounds a game.

The Cougars are connecting on 52.3% of their shots from the field. They are shooting 35% from three-point range and 69.6% from the foul line. Of their 42.9 rebounds a game, 11.4 are on offense. Gonzaga is holding opposing teams to 64 PPG. 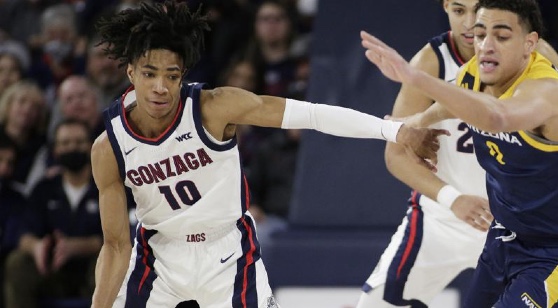 Gonzaga has covered the spread in three of its last four games. (AP)

Inside the Stats - BYU Cougars

Inside the Stats - Gonzaga Bulldogs

As expected, Gonzaga has dominated this series over the years. The Bulldogs have won nine of the last 10 meetings SU and they have a slight 5-3-2 edge ATS over that same span. BYU would have to play the game of its life to pull off the SU upset and it will still take a strong effort just to cover.

I see the points adding up quickly late Thursday night to shift the betting focus to the total line. The Cougars are going to have to score points to keep pace as opposed to trying to slow the Bulldogs down. The total has gone OVER in four of the last six games between the two and I have it going OVER this time around as well.