The Bruins head to Tucson looking to stay on a roll. UCLA has won six straight games, including a home victory last Tuesday at home at Pauley Pavilion against these Wildcats, 75-59. UCLA entered that one as a three-point underdog as the UNDER cashed.

Jules Bernard and Johnny Juzang led the way with 15 points a piece, and Bernard was able to snag seven rebounds with three assist and two steals while hitting 7-of-11 from the field. Juzang dropped in three triples, too. In all, the Bruins had four players with double-digit point totals, hitting 50% (32-of-64) of its shots in that one, while turning it over jus eight times. That made up for the fact Arizona outrebounded UCLA 45-29.

UCLA waffled Stanford last time out by a 66-43 score to easily cover a 12-point number, hitting the UNDER. The 43 points allowed marked a season best, as the defense was on point. That's three consecutive games allowing under 60 points, and six straight outings yielding 65 or fewer points. The UNDER has cashed in four of the past five outings.

Arizona will have revenge on its mind, and it bodes well that the home team is 5-2 ATS in the past seven meetings in this series. However, the favorite has cashed in just four of the past 22 meetings, too. The Wildcats have a 1-4-1 ATS mark across the past six at home, too. 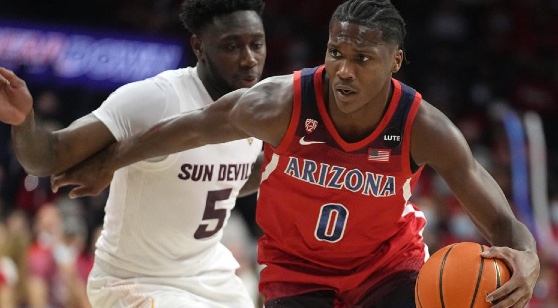 The home team is 5-2 ATS in the past seven meetings. (AP)

The first battle was a dud, as Arizona had a cold-shooting night when it needed it least, and UCLA ran to a blowout victory. It isn't going to happen again. The Wildcats will be focused, looking to redeem themselves for that ugly showing, and they'll be spurred in on by a raucous home crowd at the McKale Center. Still, I think seven is a little much for UCLA to be receiving in this game, especially given the fact they've been so hot against the number lately, hot straight up, and Arizona has struggled to tick off covers on its home hardwood.

Take the Bruins with the points, especially if you can get a flat seven, and look to the UNDER, which has been the dominant trend for both sides lately.