Only nine college football teams remain undefeated as we head into Week 9 action and two of them face off in East Lansing in one of the fiercest rivalries in the nation. For the 114th time, it’s Michigan football vs. Michigan State football.

In Saturday’s chapter of the rivalry, it’s No. 6 Michigan at No. 7 Michigan State, the first meeting since 1964 they were both Top-10 programs. The winner of this game will win the Paul Bunyan Trophy and also control their own destiny the rest of the way. The winner has a path to the Playoffs, and of course, a one-loss Ohio State is in the way soon on both schedules.

It’s a huge game to kick off Saturday's action at 12 pm ET and to make it even more interesting, how about some action on it?

Circa Sports opened Michigan as the 4-point road favorite on Sunday and it got as high as -5 on Monday but has been walked down to the original -4 on Wednesday. Circa has also dropped the total from an opener of 53.5 down to 50.5.

The betting pattern all over Nevada has seen the public split on who will win, which is +165 on the money-line at the Las Vegas SuperBook, or cover which is Michigan -4 just about everywhere including Station Casinos chain of local books which is always a great barometer of what the public is betting at their 18 retail books and phone app in Las Vegas.

While this game isn’t showing risk for the sportsbooks right now, it’s going to be one of the most bet games on Saturday with half of that action winning and carrying over so the books are going to start out with big risk tied to other games no matter who wins.

This is a once-in-a-generation situation happening with these schools. Michigan leads the series with a 71-37-5 edge, but it’s Michigan State who won at the Big House last season as 21-point underdogs under first-year head coach Mel Tucker who finished the season 2-5. But both are 7-0 now. Michigan State is 11-2 ATS in the last 13 meetings.

Michigan allows only 14 ppg which ranks No. 2 nationally and also has the fifth-ranked rush attack at 253 ypg. Michigan State has Heisman hopeful Kenneth Walker III leading the nation with 142 ypg. 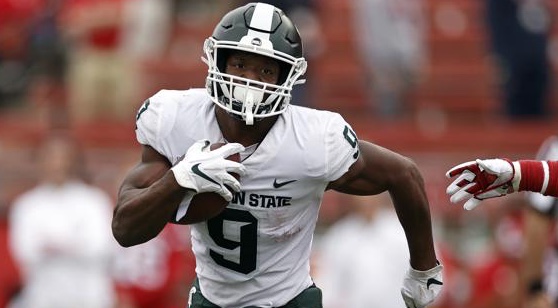 MSU running back Kenneth Walker III has 997 rushing yards and 10 total TDs on the year. (AP)

Caesars sportsbooks has Walker listed at 18-to-1 odds to win the Heisman Trophy. He’s the sixth choice to win right now, but what if he goes off in this game and gets lots of attention by being the reason Michigan State stayed undefeated. He’ll have four games after Saturday, which include dates with Ohio State and Penn State to close out the season.

Alabama QB Bryce Young is the +175 favorite to win the Heisman at Caesars followed by Mississippi QB Matt Corral (+250), CJ Stroud (+600), Pitt QB Kenny Pickett (+1200), and Oklahoma QB Caleb Williams (+1400). Then there’s Walker. Of the favorites, only Williams and Walker play for undefeated teams, and only Walker has played in all their team’s games.

I'm not saying Walker will win but I think can make the biggest run for it on big nationally televised games. Underdog team defying the odds with an underdog Heisman contender. The Heisman voters eat that stuff up.

If the winner of this game truly controls their own destiny, surely there should be some takers to win the CFB Playoffs. How about Michigan at 40-to-1 odds by Caesars. How about Michigan State at 80-to-1 odds to win? Whoever wins probably has a better shot to make the playoffs than undefeated Cincinnati who is 25-to-1 to win. One-loss Ohio State is +650 to win it all. One-loss Oregon still has a shot to impress and is 50-to-1.

McCormick said his Station books' top public sides this week were Iowa (+3.5 at Wisconsin), Georgia (-14 vs Florida), and Notre Dame (-3.5 vs. North Carolina). South Point sportsbook director also has Notre Dame and Georgia bet the most by the public, but third most was Michigan State

Same story at the SuperBook where manager Randy Blum said the public is all over Notre Dame, Georgia, and Iowa in tickets written.

Up north at Marc Nelson’s Atlantis Reno sportsbook, he’s got the regular public trio of sides that seem to be the most popular all-season with Notre Dame, Georgia, and Ohio State (-18 vs. Penn State). Nelson said it’s like “Groundhog Day” every week with those teams. The People's Choice award.

Undefeated Georgia is +120 to win the CFB Playoffs, one-loss Alabama is +230. The question is what happens to Alabama if Georgia beats them in the SEC game? Is two losses too many even though we know they’re in the top-2 rated category that makes point spreads?

The Bulldogs play the Gators in Florida in what has been called a neutral site game for decades. Jacksonville is the neutral site, 310 miles away from Athens, and about an hour away from Gainesville. Anyway, it’s 50-50 in the stands for each side. It’s the largest outdoor cocktail party in America. Circa Sports opened Georgia -13 on Sunday and got to as high as -14.5 until settling at -14 since Monday. The total has gone from 46.5 to 50.5 despite the No. 1 Georgia defense allowing only 6.6 ppg.

Nelson took sharp plays at the Atlantis on Stanford (-2 vs. Washington State) and Maryland (-4 to -5.5 vs. Indiana).

Andrews at the South Point took sharp action on Louisville, Iowa State (-7 at West Virginia), and Southern Miss (+14 to +13 at Middle Tennessee State).

No. 2 Cincinnati had a rough time last week gaining positive press in their sluggish 27-20 win at Navy, but No, 4 Oklahoma stole the headlines with their 35-23 struggle and near loss at Kansas and then dropped one slot in the AP Poll. The Bearcats have gone from -24.5 to -25.5 at Tulane this week with a total at 62.5

I’m rooting for Cincinnati to stay undefeated as I am for other undefeateds such as No. 13 Wake Forest, No. 19 SMU, No. 21 San Diego State, and No. 23 Texas-El Paso. The Bearcats have the best shot to crash the party among the outsiders of the Power 5 conferences.

Caesars sportsbooks have Cincinnati 25-to-1 to win the CFB Playoffs just because we’ve all seen how outsiders are treated in college football. They’re No. 2 and undefeated and 25-to-1?

If these schools are treated like second-class citizens with no right to ever reach a championship, maybe there should be a place these schools could race for some type of Intercontinental Championship, a second-tier title, but at least it’s something. The idea of going undefeated and being shunned at season end is just wrong.

Here’s a look at the first moves of Week 9 action at Circa Sports who open their numbers every Sunday at 11 am PT:

Arkansas State +12 to +9 at South Alabama