Either San Jose State or Nevada will be part of next week’s Mountain West Championship Game.

The Spartans and Wolf Pack have been two of the three best teams in the conference this year, and there is a chance we see a rematch of this week’s game if Boise State loses to Wyoming on Saturday.

This game will be played in UNLV’s old football stadium instead of in San Jose.

Santa Clara County has imposed strict restrictions due to COVID, affecting all college and pro teams that call the Bay Area home. That gives Nevada a bit of an edge although both schools are over 400 miles away from Las Vegas.

How to Handicap Nevada vs. San Jose State

The Spartans are having their most successful season in recent history. San Jose State was seen as a mid-tier team in the conference at best back in September, but they are the only unbeaten team in the MWC.

They rode their defense to 11-point wins over Air Force and San Diego State despite being over a touchdown underdog in both games, and they picked up another double digit win last week against Hawaii.

No opponent has stayed within 10 points of SJSU this season, but this is the toughest test yet for the Spartans as COVID led to the Spartans’ game against Boise State being canceled.

It didn’t take long for oddsmakers to come around on Nevada. The Wolf Pack were three-point home underdogs in their opener against Wyoming, but their win over the Cowboys led to this team being favored by 14 or more points in their next three games.

Nevada squeaked past New Mexico in the last of those three games and then upended San Diego State to move to 5-0 before suffering its first loss of the season against Hawaii. This is one of just three MWC teams that has been able to play all seven games to this point. 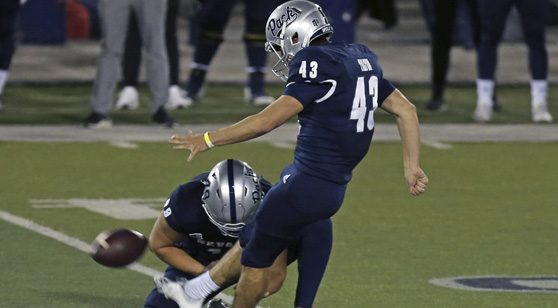 Nevada will be playing close to home on Friday when it meets San Jose State from Las Vegas instead of California. (AP)

Sophomore Carson Strong has been one of the breakout stars of the 2020 season. He was decent as a freshman, but he has been sensational this year and a huge reason for Nevada’s success.

Strong is completing 69.5 percent of his passes for 8.3 YPA with 21 touchdowns against four interceptions this year. His YPA is up by two yards, and he is taking more shots downfield than we saw in his first year on the job.

Romeo Doubs will be a First Team All-MWC receiver. Doubs has 44 receptions for 885 yards and nine touchdowns, and his 126.4 YPG average is 20 yards more than any other player in the conference.

Tight end Cole Turner is a constant target for Strong with 40 catches for 496 yards and six touchdowns. Freshman Tory Horton has been the big play threat with 12 receptions for 244 yards and five scores after last week’s monster game against Fresno State.

Toa Taua is Nevada’s leading rusher with 477 yards (5.7 YPC) and three touchdowns, while Devonte Lee is averaging 5.0 YPC. The Wolf Pack run the ball less often than all but three teams at the FBS level though.

This Nevada defense is one of the top units in the MWC. The Wolf Pack are allowing 3.4 YPC and 6.3 YPA, ranking in the top 25 nationally in both categories. They do not create havoc plays though, ranking near the bottom of list in interceptions and with a sack rate right around five percent.

Transfer quarterback Nick Starkel has shined after bouncing around the SEC. Starkel came across the country to finish his career at San Jose State, and that decision has paid off in spades. He is completing 66.2 percent of his passes for 8.8 YPA with 11 touchdowns and three interceptions.

Bailey Gaither and Tre Walker are the top two receivers for San Jose State. Gaither leads the team with 29 receptions for 471 yards and four touchdowns, while Walker has 24 catches for 329 yards and three scores. Tight end Derrick Deese Jr. has been a red zone threat with three touchdowns.

The ground game is led by Tyler Nevens. Nevens has run for 270 yards (6.9 YPC) and four touchdowns as the Spartans’ big play back. Kairee Robinson has been a steady hand averaging 4.1 YPC, and the team likes to use back-up QB Nick Nash as a running threat a few times a game. Nash is averaging 6.0 YPC and is a serviceable passer.

San Jose State’s defense has been quite good. The Spartans are allowing just 17.0 PPG and 347.2 YPG, and the run defense is strong. Opponents are averaging 3.2 YPC against this front and Cade Hall and Viliami Fehoko have combined for 10.5 sacks.

Nevada is 18-5 against San Jose State all-time. These teams met often as members of the Big West, WAC, and MWC, so there is a lot of history. The Wolf Pack have won 10 of the last 11 in this series and 15 of the last 17 games.

Last year’s game was one of the most competitive in recent history for this series.

Nevada jumped out to a big lead, but Josh Love brought San Jose State back and tied it up in the fourth quarter. He threw for over 400 yards with three touchdowns and an interception, but it wasn’t enough as Nevada’s offense rolled up big yards in a wild 41-38 win.

-- Nevada has covered five straight games as an underdog