Nevada is one of three teams to make four appearances in the Famous Idaho Potato Bowl.

However, the Wolf Pack are the only one of those teams that has yet to win a bowl game in Boise.

They failed in their most recent attempt to win this game in early January against the Ohio Bobcats, but they will have another chance against debutantes Tulane.

The Green Wave are making their third straight bowl appearance under Willie Fritz, and they are out to win their third consecutive bowl game.

How to Handicap Tulane vs. Nevada

The Green Wave have covered six of their last seven games ahead of this bowl game.

Tulane’s lone failure to cover during that stretch was on the road against Tulsa where they should have beat the Golden Hurricane outright. Tulsa was down 14-0 with 10 minutes left in the fourth quarter when third-string quarterback Davis Brin stepped in and brought the Golden Hurricane back from the brink.

He threw a 37-yard touchdown pass as time expired to send the game to overtime and a Zaven Collins 96-yard interception return for a touchdown in the second overtime gave Tulsa the win and the cover.

Tulane has been a short favorite of seven points or less in six games this season. The Green Wave lost to Navy outright as a six-point favorite in the season opener, but they picked up covers in their other five games in that situation. All five of those covers came by double digits.

The Wolf Pack were unable to qualify for the Mountain West Championship Game after their loss to San Jose State as a short favorite on December 11. Nevada was up 20-7 at halftime in that game, but the Wolf Pack were outscored 23-0 the rest of the way to fall to the eventual conference champions.

Nevada covered the number in its first three games.

The Wolf Pack have alternated ATS wins and losses over the last month though. They are 2-0 ATS as a short underdog ahead of this tilt, knocking off Wyoming as a three-point underdog in the season opener and defeating San Diego State 26-21 as a two-point dog on November 21.

Fritz is one of the most run-heavy coaches you will find in the country. Tulane runs the ball on over 60 percent of its offensive plays.

Stephon Huderson leads the way with 721 yards (6.1 YPC), and Cameron Carroll is the second-leading rusher with 621 yards (5.5 YPC) and 11 touchdowns. There isn’t much depth though as Amare Jones announced he was entering the transfer portal last week, and both Tyjae Spears and Corey Dauphine are out for the season.

Michael Pratt has been a revelation in this offense. The freshman quarterback out of Boca Raton was behind Keon Howard to start the season, but he supplanted Howard after just a few games. Pratt is completing 55.9 percent of his passes for 7.2 YPA with 18 touchdowns and five interceptions. Additionally, Pratt is averaging 4.9 YPC as a runner.

Watts’ twin brother Phat Watts is the third leading receiver on the Green Wave, but he is the only other player with over 200 receiving yards.

Offensive coordinator Will Hall left the team to become the head coach of Southern Miss a few weeks ago.

That opened the door for Chip Long to join Tulane in that position. Long was previously the offensive coordinator at Memphis and Notre Dame, so this is a nice hire for Fritz and the Green Wave.

Johnson had 10 sacks this season, while Sample had five sacks for Tulane. Both players were selected First Team All-AAC, anchoring a defense that allowed just 3.3 YPC but 8.4 YPA and 279.4 passing yards through the air. 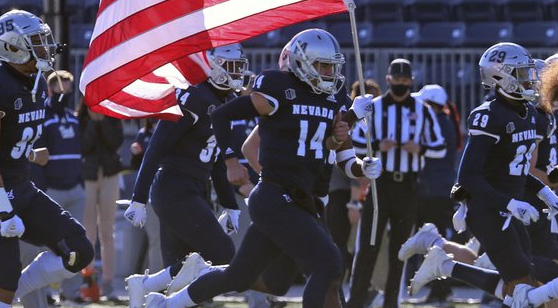 The Nevada Wolf Pack will be playing close to home on Tuesday when they meet Tulane from Boise, Idaho. (AP)

Carson Strong completed 69.4 percent of his passes for 7.9 YPA with 22 touchdowns and four interceptions this season.

Strong has an outside chance to get to 3,000 yards if he has a huge day against Tulane’s weak pass defense in Boise. He has significantly improved on his decent freshman season in Jay Norvell’s offense, and that’s good news for Nevada in 2021. Strong was named MWC Offensive Player of the Year last week.

Their emergence has been needed since Elijah Cooks missed nearly the entire season. Doubs and Turner were both named First Team All-MWC.

The ground game is led by Toa Taua. Taua leads Nevada with 573 yards (6.1 YPC), and he is a solid receiver out of the backfield too.

Devonte Lee is the second-leading rusher on this team, but Strong is not a running threat and defenses don’t have to worry about a spy against him.

The Wolf Pack are better than average on defense, allowing 22.9 PPG and 379.2 YPG this season.

Nevada has surrendered at least 20 points in five straight games though.

There has only been one game between these programs.

Tulane knocked off Nevada 34-17 back in September 1992. The Wolf Pack went on to win the Big West Conference that year, but the Green Wave went 2-9 as an independent.