There is no bowl game in Hawaii this year due to COVID-19, but the Rainbow Warriors will be taking part in a bowl game on Christmas Eve nonetheless.

Hawaii will head to the mainland to take on the Houston Cougars in the New Mexico Bowl.

This bowl game usually takes place in Albuquerque, New Mexico, but the pandemic caused the game to be moved to Frisco, Texas in late November.

That gives the Cougars a big edge, as they have a much shorter distance to travel.

How to Handicap Hawaii vs. Houston

Houston is a double-digit favorite despite finishing the season 3-4.

The Cougars’ four losses were all against very good teams though, as they fell to BYU, UCF, Cincinnati, and Memphis.

This team essentially behaved as the oddsmakers expected throughout the 2020 season. Houston was a favorite and covered the number in all three of its victories, but the Cougars were underdogs in three of their four losses and failed to cover the spread in all four defeats.

The Cougars hadn’t played for nearly a month prior to their season finale against Memphis on December 12. Houston was a seven-point favorite in that game, but the Cougars were toothless on offense for the first three quarters. They could only muster six points before scoring three touchdowns in the span of 13 minutes to tie the game before losing 30-27 on a last second field goal.

Hawaii was only favored in three games this season.

The Rainbow Warriors failed to cover the spread in each of those three games, and they were blown out by Wyoming as a short favorite on Halloween.

They did pull off a few upsets though, knocking off Fresno State as a short favorite in the season opener and dealing Nevada its first loss of the season on Thanksgiving weekend. 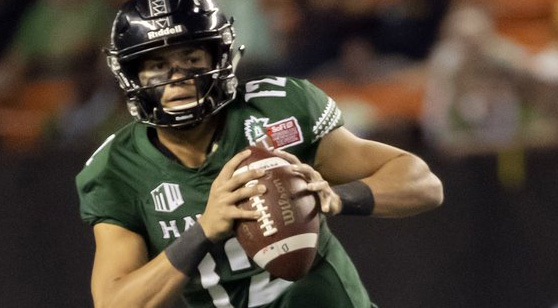 Hawaii made three road trips off the Islands this season and the school went 1-2 both SU and ATS. (AP)

Hawaii is running the ball more often than it did under former coach Nick Rolovich, but the offense still heavily relies on a playmaking quarterback.

Sophomore Chevon Cordeiro has done a decent job running this offense. He is completing 62.1 percent of his passes for 6.7 YPA with 11 touchdowns and six interceptions. Cordeiro runs often in this scheme, leading the Rainbow Warriors with 450 yards (4.2 YPC) and seven touchdowns.

Miles Reed decided to enter the transfer portal, so Calvin Turner is likely to be Hawaii’s top running back in this game. Turner is a former quarterback that transferred in from FCS Jacksonville, and he is downright terrifying in the open field. He comes into this game with 271 rushing yards (5.6 YPC), and he also leads the team with 29 receptions for 458 yards and five touchdowns.

Jared Smart, Rico Bussey, and Melquise Stovall are the top receivers in this offense. All three receivers have similar stats, totaling around 30 receptions while averaging 9.0 YPR as Cordeiro likes to dink and dunk underneath.

Matthew Shipley hasn’t missed an extra point yet, but he has struggled from longer than 30 yards. Shipley is 4-9 from 30 yards or more, so the Rainbow Warriors can’t rely on points unless they get in the red zone.

Defensively, the Rainbow Warriors have had a really hard time stopping the run.

Hawaii is allowing 5.4 YPC and 231.5 YPG on the ground in eight games. It’s never a good thing when five of your seven top tacklers are defensive backs, as opposing rushers are constantly getting to the second level.

When Houston made the decision to move on from former head coach Major Applewhite in favor of Dana Holgorsen, the Cougars were expecting a return to prominence.

However, the program has only moved backward in two seasons under Holgorsen. Houston went 4-8 in a weird debut season, and this team could only manage a 3-4 record in this beleaguered campaign.

Junior Clayton Tune has put up solid numbers in this offense. Tune isn’t the most accurate quarterback, completing 60.7 percent of his passes for 7.4 YPA with 13 touchdowns and seven interceptions, but he is a dangerous dual-threat option.

Tune is averaging 4.3 YPC and leads Houston with five rushing touchdowns. He gives this run game a needed spark, as there has only been one run of 30 yards or more in 2020.

RB Kyle Porter leads the Cougars with 394 yards (4.1 YPC), but Mulbah Car is back to help carry the load after being sidelined by an ankle injury earlier this season.

Houston is a middle of the pack team running the ball, averaging 4.3 YPC with 155.3 YPG on the ground. The ground game only found real success against South Florida, and the Bulls failed to beat an FBS opponent.

The receiving corps took a hit when Marquez Stevenson declared he was opting out in order to focus on the NFL Draft. Stevenson led Houston in receiving touchdowns, and he was the big play threat on the roster (15.4 YPR).

Keith Corbin and Nathaniel Dell are the only other two players on Houston with more than 20 receptions.

Houston’s defense was below average this season, allowing 32.6 PPG and 417.3 YPG. The Cougars ranked outside the top 70 in both categories, and the pass defense was a particular issue. This secondary allowed 8.0 YPA, and these defensive backs only intercepted three passes in seven games.

The defense is going to be even worse against Hawaii as top defensive end Payton Turner and linebacker Grant Stuard are both sitting out this game in order to test the waters for the NFL Draft.

Turner leads the team with five sacks, while Stuard led the team with 61 tackles. No other player had more than 30 tackles on this team, so there are real concerns on this side of the ball.

Additionally, Houston beat writer Joseph Duarte has reported that as many as 20 players could be academically ineligible or held out due to COVID.