It’s not often we see college football on Christmas Day, but there will be a bowl game on the holiday this year.

The Marshall Thundering Herd and Buffalo Bulls will square off in the Camellia Bowl, giving sports fans something to watch outside of the NBA.

This will be the seventh Camellia Bowl, and the first trip for both Marshall and Buffalo to this bowl game.

How to Handicap Marshall vs. Buffalo

This will be the second bowl game to be held at the Cramton Bowl in three days. Memphis and Florida Atlantic met in the inaugural Montgomery Bowl on Wednesday, so the field may not be in the best shape since it rained during that game.

Both of these teams enter the Camellia Bowl after losing in their conference championship game. Marshall started the season 7-0 and covered the spread by at least a touchdown in each of its first four games. The Thundering Herd scored a nice upset over Appalachian State in their second game of the season, but a three-week layoff between November and December really hurt this team.

The Thundering Herd were stunned by Rice in their regular season finale, losing 20-0 at home to the Owls despite being a 24.5-point favorite. Still, Marshall was favored over UAB in the Conference USA Championship Game.

That turned out to be a mistake as Marshall could only pick up 10 first downs and less than 270 yards of offense in a 22-13 loss to the Blazers.

Buffalo was the scariest team in the MAC heading into the MAC Championship Game.

The Bulls blasted their five regular season opponents, posting a 4-1 ATS mark as they won each game by at least 19 points. Jaret Patterson was setting records left and right, amassing 710 rushing yards and 12 touchdowns in a two-game stretch against Bowling Green and Kent State.

The Bulls were double-digit favorites over Ball State in the MAC Championship Game. The Cardinals scored 28 points in an eight-minute stretch in the second quarter though, capped off by a Christian Albright fumble return for a touchdown. Buffalo could only muster seven points in the second half, culminating in a 38-28 loss for the Bulls.

Three of Marshall’s best players decided to opt out of this bowl game in order to focus on the NFL Draft.

Knox led the team with 887 rushing yards (4.8 YPC) and nine touchdowns. Without Knox available, Marshall will turn to Sheldon Evans and Knowledge McDaniel to carry the load. Evans ran for 248 yards (4.6 YPC) and four touchdowns this season, while McDaniel had 158 yards (6.3 YPC) and a touchdown in limited action.

Which Grant Wells will we see on Christmas?

The home-grown freshman quarterback was solid in Marshall’s 7-0 start, but he did not look good in the team’s two losses. Wells threw five interceptions in the loss to Rice earlier this month, and he completed just 8 of 23 passes against UAB in last week’s conference title game.

Tight end Xavier Gaines is the leading receiver on the team with 26 receptions for 398 yards and four touchdowns, while Corey Gammage and Artie Henry are also solid options for Wells.

The loss of Conference USA Defensive Player of the Year Beckett is a big blow to this defense, but there are two other First Team All-CUSA selections in defensive end Darius Hodge and defensive back Steven Gilmore.

Patterson ran for over 1,000 yards in the regular season on the strength of his performances against Kent State and Bowling Green. It was his third straight season with over 1,000 yards and at least 14 touchdowns. He averaged 7.6 YPC on his way to winning the MAC MVP and Offensive Player of the Year awards.

However, he had his worst game of the season in the conference title game with 18 carries for 47 yards and a touchdown. Patterson is dealing with a knee injury, but he is listed as probable for Friday.

Back-up running back Kevin Marks Jr. has better rushing numbers than all but a few players across the country. Marks has run for 603 yards (7.8 YPC) and six touchdowns in the best rushing offense in college football.

Thanks to Patterson and Marks, Buffalo is third in scoring offense (47.8 PPG) and first in yards per play (7.8 YPP) and rushing offense (7.2 YPC and 309.2 YPG). That makes this game with Marshall a clash between the best ground game and the best front seven.

Kyle Vantrease doesn’t take to the air much in this offense. He has been efficient thanks to the run game though, completing 63 percent of his passes for 9.3 YPA with seven touchdowns and two interceptions.

This offensive line has only allowed him to be sacked one time all season, leading to Kayode Awosika and Mike Novitsky being named First Team All-MAC.

This front seven is allowing 4.0 YPC and has done a good job creating havoc with 16 sacks and six interceptions in six games. 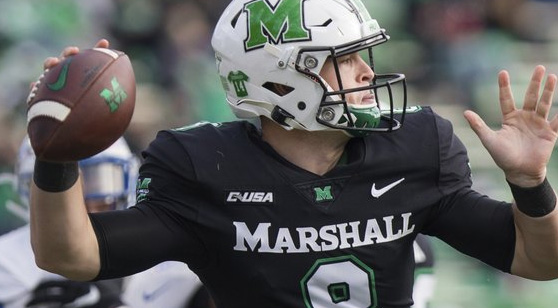 QB Grant Wells will try to keep Marshall's perfect record against Buffalo intact when they meet on Christmas Day. (AP)

The Bulls have never defeated the Thundering Herd.

Marshall is 8-0 against Buffalo all-time and trounced the Bulls for six straight seasons between 1999 and 2004 when both schools were part of the MAC.

The Thundering Herd won all of those games by at least 10 points, and four of those six victories were by 33 points or more.

In 2004, Stan Hill led Marshall to a 48-14 win over Buffalo in the last game between these teams. Hill completed 19 of 26 passes for 269 yards with four touchdowns and two interceptions, as the Thundering Herd cruised to a victory despite three turnovers and 11 penalties for 111 yards.