Either the Wisconsin Badgers or the Wake Forest Demon Deacons will end the 2020 season with a losing record.

Both teams are .500 heading into the Duke’s Mayo Bowl, and while this is somewhat of a home game for the Demon Deacons, the oddsmakers aren’t optimistic about Wake Forest’s chances.

Wisconsin is currently a touchdown favorite against Wake Forest on Wednesday.

How to Handicap Wake Forest vs. Wisconsin

Dave Clawson became the first Wake Forest coach to take this program to four straight bowl games last season, and he is extending his record this year. The Demon Deacons are 3-1 under Clawson in bowl games, but they lost 27-21 to Michigan State in the Pinstripe Bowl last year.

Wake Forest started the season with consecutive losses to Clemson and North Carolina State, losing a shootout to the Wolfpack in mid-September.

The Demon Deacons responded with four straight wins in October though, including a 23-16 victory over Virginia Tech as a double-digit underdog. They nearly knocked off North Carolina in a 59-53 barnburner in their penultimate regular season game before lying a dud against Louisville in their season finale.

The Badgers started their season with a bang and ended with a thud. Wisconsin dismantled Illinois and Michigan by a combined score of 94-18 in its first two games. Both games went over the total and Wisconsin covered easily.

However, the offense didn’t have anywhere near the same success after that, leading to four straight ATS losses and games that went under the total. Wisconsin scored a total of 20 points in its next three games (losses to Northwestern, Indiana, and Iowa) before edging Minnesota in overtime to close out the season. 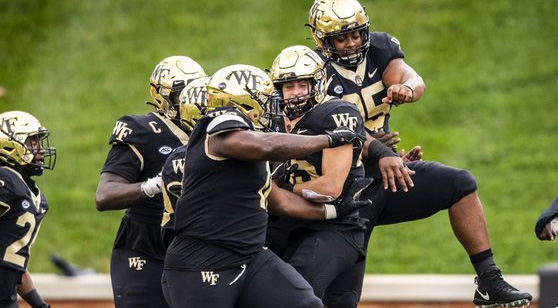 Wake Forest has struggled away from home this season, going 1-3 SU and 2-2 ATS. (AP)

The Demon Deacons won’t have running back Kenneth Walker III available for this game as he opted out of the remainder of the season prior to the Louisville game.

Walker led the Demon Deacons with 13 rushing touchdowns, splitting the carries with Christian Beal-Smith. Beal-Smith was the more efficient runner with 650 yards (5.4 YPC), and he has run for at least 4.1 YPC in six straight games.

Freshman Justice Ellison will take over as the No. 2 RB. Ellison ran the ball nine times for 50 yards against Louisville in the season finale.

Quarterback Sam Hartman has been in and out of the starting lineup during his three years in Winston-Salem. Hartman gave way to Jamie Newman last year, but he has thrived running the mesh RPO in 2020.

He is completing 58.9 percent of his passes for 1,906 yards (8.1 YPA) with 10 touchdowns and an interception this year. Hartman threw for 429 yards and four scores in a near upset of North Carolina last month as it’s difficult for defenses to stop this offense given how long Hartman holds the run option.

Donavon Greene and Taylor Morin are the other two main receivers in this offense, but Greene might not be available due to injury.

Wake Forest does not have a good defense.

The Demon Deacons are allowing 34.1 PPG and 470.4 YPG through eight games. They were shredded by Clemson, North Carolina State, North Carolina, and Louisville in their four losses, but they allowed no more than 23 points in their four wins. This defense will be without its most talented player against Wisconsin as Carlos Basham Jr. is declaring early for the NFL Draft.

QB Graham Mertz looked like a potential superstar against Illinois in the season opener. He struggled against Michigan in his next start, and it’s been a disastrous decline from there for the freshman quarterback.

Mertz has completed 60 percent or less of his passes in his last four games with one touchdown against five interceptions. He is averaging under 6.0 YPA in four of his last five starts too.

The Badgers are hoping that RB Jalen Berger is ready to return against the Demon Deacons on Wednesday. The freshman running back missed Wisconsin’s last two games, and the ground game took a hit in his absence. Berger has 267 yards (5.9 YPC) in three games.

He has been more efficient than either Garrett Groshek or Nakia Watson, so Paul Chryst is hoping Berger can take the field.

Tight end Jake Ferguson leads the Badgers with 29 receptions for 284 yards and four touchdowns. A lot of his production came in the season opener against Illinois though. The second leading receiver on the roster is 5’7 Jack Dunn, and he has seen more targets over the last couple weeks. Groshek is the only other player on Wisconsin with more than 10 receptions.

Wisconsin has one of the best defenses in the nation.

This defense is ranked fifth according to Bill Connelly’s SP+ although they don’t do a great job of creating havoc plays. Opposing quarterbacks are completing just 51.8 percent of their passes against Wisconsin, but cornerback Rachad Wildgoose won’t suit up on Wednesday.

This is the first time these teams have met on the gridiron.

-- Wake Forest has covered in five of its last six games

-- Wisconsin has failed to cover in four straight games