Alabama is the biggest favorite in College Football Playoff history in this Rose Bowl showdown vs. Notre Dame. The game has been relocated to Jerry World in Arlington, TX, so that a limited group of fans can attend.

Alabama is listed as an 11-point favorite at most spots for first-half wagers. Nick Saban’s team has taken the cash for first-half bets in seven consecutive contests and is 9-2 ATS in the first half for the season.

The four games that ‘Bama didn’t get to 48 points were when it scored 42, 41 (twice) and 38, but it’s worth noting that three of those were complete blowouts (41-24 vs. Georgia being the lone exception) with Saban lifting key starters by early in the fourth quarter or sooner (with a 42-13 win vs. Auburn being an exception on Saban pulling starters early -- because you don’t do that in The Iron Bowl).

How to Handicap Notre Dame vs. Alabama

Alabama has won seven of its 11 games by 28 points or more. Going into the SEC Championship Game vs. Florida on Dec. 19, the Tide had won by at least 15 points (at Ole Miss) in its first 10 games (with victories by 17 points vs. UGA and 19 at Missouri). However, Saban’s bunch got all it wanted and then some from the Gators in the 10th meeting between these schools in the SECCG.

Alabama held off multiple late charges by UF to capture a 52-46 win, but Dan Mullen’s squad easily took the cash as a 16-point underdog. Bettors on the ‘over’ were winners when Will Reichard nailed a 20-yard field goal to give the Tide a 45-31 advantage with 9:53 remaining.

Steve Sarkisian’s offense scored TDs on all five first-half possessions, including a 17-yard TD pass from QB Mac Jones to RB Najee Harris to give ‘Bama a 35-17 lead with six ticks left before halftime. Mullen made the first of two crucial clock-management mistakes when he didn’t direct Kyle Trask to allow more time – when there was 20 seconds left -- to drip off of the play clock before Trask scored on a one-yard TD run with 1:09 remaining until intermission.

The Jones-to-Harris TD connection before the break seemingly buried Florida, but the Gators had zero plans of going away quietly. Just a few plays into the third quarter, Trask found Trevon Grimes for a 50-yard TD pass with Grimes made a leaping grab on the sidelines over CB Patrick Surtain Jr., who many think of as the best cover corner in the nation.

Finally, Florida got a stop. In fact, it got a second stop after being forced to punt. Next, the Gators went 80 yards in 12 plays and made it a 35-31 game thanks to Nay’Quan Wright’s three-yard TD run.

Alabama countered with a 10-play, 75-yard drive to extend its lead to 42-31 on Harris’s one-yard TD run. Then on UF’s next play from scrimmage, Will Anderson sacked Trask and forced a fumble that was recovered by Tim Smith at UF’s 10. Florida forced a three and out, though, and the Tide’s short FG made it a 14-point lead.

UF trimmed the deficit to 45-38 with 6:33 left on Dameon Pierce’s one-yard TD run, but Alabama countered when Jones found DeVonta Smith for a 15-yard scoring strike at the 4:59 mark. Florida had one more answer with Trask throwing a perfect ball into triple coverage that star tight end Kyle Pitts brought down for a 22-yard TD reception.

With 2:07 remaining, Florida had just two timeouts left. Each of those would be worth 40 seconds so if the Gators were able to force a three and out, they were probably going to get the ball back with about 1:00 left.

However, Mullen inexplicably opted to use a timeout…before the extra point! What, you ask? Hey, don’t ask me. In short, it was a deplorable decision and then some.

Mullen decided to use the timeout to go for two instead of one. In other words, he unfathomably felt there was more value in getting a two-point conversion than having an extra 40 seconds of clock.

As it turned out, Alabama recovered UF’s onside kick attempt, but the Gators did force a three and out. Instead of having about a minute left, though, UF took over deep in its own territory with only 17 ticks remaining. With zero timeouts to work with, Trask was sacked on the first play of the possession and UF didn’t have enough time to get another play off.

The two-point attempt was successful, albeit completely meaningless. After Trask’s jump ball throw to Pitts garnered a pass-interference penalty, Trask ran it in to make the final score, 52-46. It was the second-highest scoring game in SECCG history.

Jones finished the night in The ATL with 418 passing yards and five TDs compared to only one interception. Harris ran for 178 yards and a pair of TDs, in addition to catching five passes for 67 yards and three TDs. Smith had 15 receptions for 184 yards and two TDs.

Notre Dame saw its 16-game winning streak dating back to last season snapped in the ACC Championship Game, where Clemson avenged a 47-40 double-overtime loss to the Fighting Irish in South Bend by cruising to a 34-10 win as an 11.5-point ‘chalk.’ The 44 combined points dropped ‘under’ the 58-point total.

After taking an early 3-0 lead, Brian Kelly’s team was outscored 34-0 over the next 42-plus minutes of play. Freshman RB Chris Tyree’s 21-yard TD run with 8:09 left ended the onslaught, but Notre Dame was done at that point.

Notre Dame averages 217.6 yards rushing per rank No. 21 nationally. The Fighting Irish had run for 208 yards on 40 attempts in the first game vs. Clemson at home, but it couldn’t get its ground attack going in the rematch. Clemson, which was missing several defensive starters in the first meeting, limited Kelly’s team to merely 44 rushing yards and 30 carries.

Senior QB Ian Book threw for 310 yards and one TD without an interception in the first encounter with the Tigers. He completed 20-of-28 throws in the ACCCG, but those completions only amounted to 219 passing yards and zero TDs.

Notre Dame only committed two penalties and didn’t have any turnovers, but Clemson was still 24 points better on a neutral field. That performance has prompted oddsmakers to give the Fighting Irish little to no chance vs. Alabama.

In addition to its home win over Clemson, Notre Dame has impressive victories at Pittsburgh (45-3), at Boston College (45-31) and at North Carolina (31-17). In fact, the Irish’s defense completely blanked UNC and its high-octane offense in the second half in Chapel Hill.

For the season, Book has completed 64.0 percent of his passes for 2,600 yards with a 15/2 TD-INT ratio. Book also has 430 rushing yards, eight TDs and a 4.3 YPC average. His favorite target is junior WR Javon McKinley, who has 40 receptions for 697 yards and three TDs. Senior WR Bennett Skowronek, a grad transfer from Northwestern, has 25 catches for 398 yards and five TDs, while freshman TE Michael Mayer has 35 grabs for 388 yards and two TDs.

What’s a good indicator that an offense is absolutely lethal? Well, for starters, it’s nice to have three of the five finalists to win the Heisman Trophy. That’s what the Tide has, with Harris finishing fifth in the voting. Smith and Jones join UF’s Trask and Clemson’s Trevor Lawrence as the four players vying to win the coveted award that’ll be announced on Jan. 5.

Alabama is fifth in the country in total offense, fifth in passing yards and second in scoring with its 49.7 PPG average. Jones has connected on 76.6 percent of his passes for 3,739 yards with a 32/4 touchdown-to-interception ratio. Smith has 98 receptions for 1,511 yards and 17 TDs.

Harris has 32 catches for 316 yards and three TDs. The senior RB has gashed opposing defenses for 1,262 rushing yards and 24 TDs. He is averaging 5.9 yards per carry. Smith also has 245 return yards and one TD on 11 special-teams touches.

Jaylen Waddle was lost for what was believed to be a season-ending injury in a 48-17 win at Tennessee on Oct. 24. He has made a fast recovery and although he’s ‘out’ vs. Notre Dame, there remains a glimmer of hope that the speedster might be able to return for the finals of the College Football Playoff.

Whatever the case, sophomore WR John Metchie has taken full advantage of Waddle’s absence. He’s enjoyed a breakout year with 44 catches for 782 yards and six TDs. Metchie also made a huge play in the first half of the win over Florida. With the score knotted at 7-7, UF’s Trey Dean intercepted Jones and was returning the pick along the left sideline with multiple blockers in front of him.

Metchie had run a corner route into the end zone and was racing toward Dean to make a tackle. Dean never saw Metchie coming and got absolutely clocked. Metchie’s hit forced a fumble that Alabama recovered. With a new set of downs, the Tide scored a few plays later and the seven-point swing ended up being pivotal.

Trask and the Gators showed that Alabama’s defense can be vulnerable. Lane Kiffin’s Ole Miss squad did the same in a 63-48 home loss on Oct. 10. Between those two games, the Tide’s stop unit vastly improved – at least its stats did.

Perhaps the improved defensive numbers can be attributed to facing a slew of suspect offenses, though? Arkansas QB Feleipe Franks was injured when Alabama came to Fayetteville, so he was nowhere near 100 percent healthy one week after missing the Razorbacks’ game at Missouri. When ‘Bama faced LSU and Mississippi St., both schools were playing true freshman QBs.

The other QBs the Tide faced between its wins at Ole Miss and vs. UF included Tennessee’s Jarrett Guarantano, Kentucky’s Terry Wilson and the road-version of Auburn’s Bo Nix. 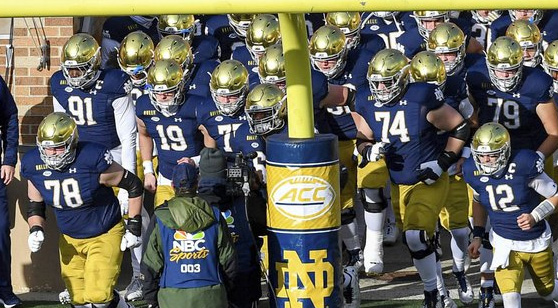 A.J. McCarron completed 20-of-28 passes for 264 yards and four TDs without an interception. Eddie Lacy and T.J. Yeldon ran for 140 and 108 yards, respectively, with one rushing TD apiece. Amari Cooper had six receptions for 105 yards and two TDs.

VI Expert Matt Blunt has once again put on his mining helmet and dug up some great analytical numbers for this year’s Final Four.

In Part 1, he provides Positives and Negatives for the below categories:

After a complete data mine of the eight categories, his Final Tally crunches the positives and negatives for all four schools and offers up his future wager pick. 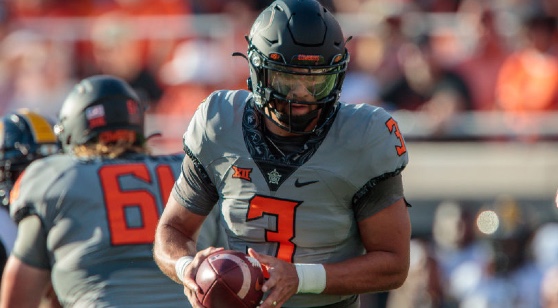