Week 1 of college football season will reach its height in Charlotte on Saturday night – as the third ranked Clemson Tigers will square off against the fifth-ranked Georgia Bulldogs for a top-five showdown in the 2021 Duke’s Mayo Classic.

After getting spanked by Ohio State in the first round of last year’s College Football Playoff (49-28), Clemson heads into Week 1 of the 2021 season still ranked first in the ACC and third in the nation – and rightfully so, despite losing its superstar quarterback, Trevor Lawrence, to Jacksonville in the NFL Draft.

Most of the pre-season excitement surrounding the Tigers deals with the fact they have a familiar face expected to fill their massive void at quarterback – as sophomore D.J. Uiagalelei will be stepping in as Clemson’s lead signal-caller, who previously threw for 781 yards and four touchdowns across a pair of starts against Boston College and Notre Dame last year (69.4% CMP, 0 INT).

On the other hand, after spending his first two collegiate campaigns as a member of the USC Trojans, JT Daniels transferred to Georgia prior to his junior season – and before his opening tenure with the Bulldogs concluded, he had already claimed the team’s starting role.

I’ll take the over here (OU 51.5), as I expect to see a highly competitive duel between powerhouse Heisman Trophy candidates on Saturday evening at Bank of America Stadium.

Bet in Tennessee
Bet in Virginia
Other Betting States

After watching over half of Georgia’s previous season from the sidelines, Daniels finally got an opportunity to exhibit his overall worth in Athens due to an injured Stetson Bennett in Week 8 – and he certainly didn’t miss it, considering the former Trojan threw for 401 yards and four touchdowns against Mississippi State during his Bulldogs’ debut.

Daniels was far quieter during his pair of starts against South Carolina and Missouri, but he still managed to flash his glaring potential one last time against Cincinnati in the Peach Bowl – as Daniels racked up 392 passing yards on 68.4% completions during Georgia’s impressive victory over the undefeated Bearcats (24-21).

On the other hand, Uiagalelei heads into his sophomore season with massive shoes to fill for Clemson – and while his passing ability might not be entirely up to par with Lawrence’s, the Tigers still clearly possess a quarterback capable of taking home this year’s Heisman and leading them to a title. Barring any extenuating circumstances, I truly believe Daniels and Uiagalelei are both primed for Hesiman-caliber seasons – which is why taking the over and enjoying the showdown appears to be the best bet here. 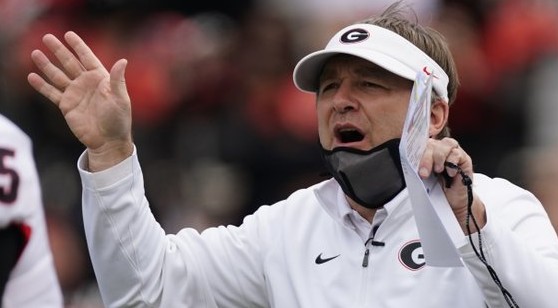 The Georgia Bulldogs have gone UNDER the point total in five straight season opener games. (AP)