Pundits and cheeky football fans alike have circled the September 4 showdown between the Louisiana Ragin’ Cajuns and Texas Longhorns as a potential upset since January. The Ragin’ Cajuns have won double-digit games for two straight seasons and opened 2020 with a road win over Iowa State. Texas has been underwhelming for over a decade now, and a season opening loss to the Steve Sarkisian era would be an ominous start.

Billy Napier has built himself a powerhouse in southern Louisiana. Napier is easily the best recruiter in the Sun Belt, and he has supplemented his roster with several SEC transfers over the last few years. That has led to increased speculation that he will eventually get an SEC job, and he was linked to a couple different openings last cycle.

Levi Lewis emerged as a mobile threat in 2020. Lewis hadn’t shown a lot of mobility in his first three seasons on campus, but he averaged 6.1 YPC when he decided to tuck it and run last season. That helped him overcome a downturn in his accuracy, as he wasn’t as good of a passer in 2020 as he was in 2019.

Texas will have a new signal caller under center. Sam Ehlinger has finally moved on after four years in Austin, opening the door for Hudson Card and Casey Thompson. Steve Sarkisian has announced that Card will start, and Thompson will see some playing time, as these two continue their quarterback competition on Labor Day Weekend.

Fortunately for the Longhorns, Bijan Robinson is one of the most explosive running backs in the country. Robinson averaged 8.2 YPC in 2020, and he is running behind a beefy offensive line with two very good players in Derek Kerstetter and Denzel Okafor. They have the potential to open big holes against this Louisiana front seven. 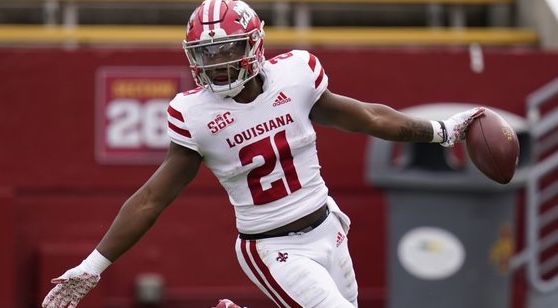 Louisiana has won seven straight games and 10 of its last 11 games. (AP)

Bet in Tennessee
Bet in Iowa
Other Betting States

It’s tempting to fall into the trap of thinking that Louisiana can pull off the upset. After all, the Ragin’ Cajuns did knock off Iowa State in Ames last season, and the Cyclones were better than the Longhorns. However, Louisiana only had 272 total yards of offense and 14 first downs in that game, and they benefited from two turnovers and two special teams touchdowns. Texas has too much talent and depth to fall into the same trap this year.