We finally have another real week of college football to gamble on, and this should be an exciting game. Nevada comes in with one of the most exciting young offenses in college football, led by Mountain West player of the year Carson Strong. California is known for its strong defensive play over the last couple seasons, and it's only going to get better this year.

A lot of this game is going to come down to which team gets to play their style of football. Nevada wants to play a fast, uptempo air raid attack led by one of the best quarterbacks in the nation. California wants to control the clock, slow things down, limit big plays, and control the ball while on offense.

-3 is an incredibly fair spread for this game. The Golden Bears are essentially just getting three points because of their home field advantage, realistically this game is a pick’em. That being said, I'm siding with California on Saturday night. Some of the sharpest books in the entire country have already moved their lines to -3.5, implying that they think the golden field goal number isn't quite enough.

I'm a big fan of Carson Strong and his future NFL career, it may be a mistake to doubt him this early. It just seems like California is stronger at a majority of the positions outside of quarterback and wide receiver. Chase Garbers, California's starting quarterback, doesn't lack talent himself. While he's been sidelined with injuries for a significant amount of time, I think he can truly act as California's x-factor. 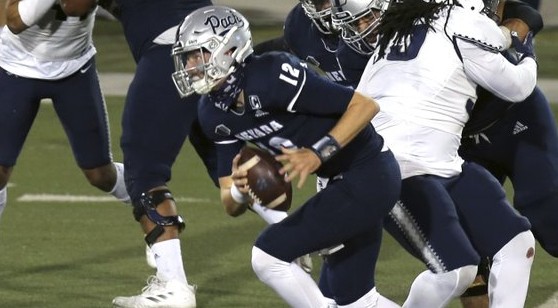 Nevada quarterback Carson Strong hopes to lead the Wolf Pack to a Mountain West title in 2021 with high expectations for the Heisman contender. (AP)

These teams don't really have much relevant head-to-head data available, so we are going off what we saw last year and a lot of preseason information. I'm excited to see Carson Strong in action, he knows his name has been rising on draft boards all summer and that's definitely going to be something to keep an eye out for.

I'm expecting a hard fought battle between two teams with high expectations this year, whoever wins is going to be incredibly satisfied going into week two. California -3 is the play, if you only have -3.5 available then i like the alternative of playing the moneyline in a parlay with Kansas State which you can read more about in that article.