This is the first time in history that both Iowa and Iowa State are ranked when facing each other, but most of the focus seems to be on the Cyclones. The game will be won on the ground as both teams will do whatever they can to keep the ball out of their respective quarterback’s hands. This is a game made for the Hawkeyes and I love getting anything over 3 points.

Tyler Goodson is on an absolute tear; picking up where he left off last season with a 99 yard-TD performance week 1 against Indiana. While the defense will be a notch better - as ISU boasts the reigning Big 12 Defensive Player of the Year in LB Mike Rose – Goodson is way too much to handle. Iowa may have the best defense in the country, and I feel more confident in their ability to slow down ISU’s Breece Hall, rather than anyone on the Cyclones stopping Goodson.

Spencer Petras was marginal against Indiana last week, while Brock Purdy did even less against Northern Iowa. Neither one of these guys are standout passers by any means, but in this case it’s a bet on Petras not being the reason why his team loses, versus Purdy not being able to make necessary throws against that suffocating Hawkeyes defense. This line opened at 5 and was bet down to 3.5 at one point, now back to 4, so there’s still decent value in Iowa.

The line is off when you look at how legit the Iowa defensive backfield is combined with how poorly ISU played against Norther Iowa. This is an even game with a 3-point swing for home field advantage, that 1 point of value is plenty to hop on Iowa. Both running backs represent their conferences as the best at their position, so don’t bet on any big days from the signal callers. Both teams play it safe, but Iowa gets the win.

The total sits at 46 with both teams parading out some of the nation’s best talent on defense. Neither QB has put up any mind-blowing performances to think this game won’t finish under, as the running backs and running clock should help. Dating back to last year and including last week, Iowa has now won 7 straight. Goodson has notched a TD in each of those games, while Petras has thrown for 1233 yards, 8 TD to only 2 INT. That’s enough to trust Petras to not lose the game – just let Iowa’s defense do the rest. 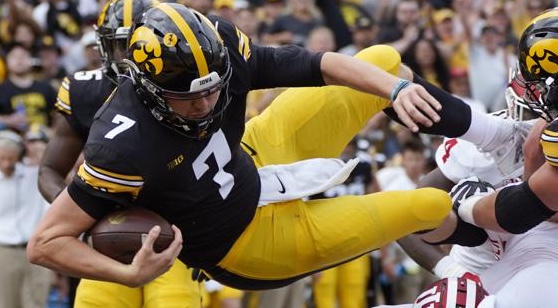