This is a very important game for two teams coming in with very different trajectories. Michigan State is 2-0 with two straight fairly easy wins, one of which over divisional rival Northwestern and the other over Youngstown State. Miami is coming with a crushing defeat against Alabama, in blowout fashion, and a narrow victory over Appalachian State. As someone with Michigan State fanhood in my blood, I know the pains that go into betting on this team but it's looking like some things are starting to change in that department this year.

One of the best things Michigan State has done so far is win the battles, both on the offensive and defensive lines, and establish the run. While they aren't stuck in the 1900’s like some teams (Navy), they still definitely run a more old school type of offense focused on winning battles in the trenches and tough runs. Kenneth Gainwell has dominated so far with 30 attempts, 321 yards, and five touchdowns - most of which came against a very solid Northwestern team. Last week he was able to mostly rest up for one of his toughest challenges of the week, definitely a name to look out for in the player prop department.

Despite playing tough opponents the Miami defensive front has been impressive. Michigan State really hasn't played a group this talented and will need to be prepared to face a lot of pressure, very early on in the game. Overall, I think this is just too many points to lay for Miami. I'll take Michigan State at +6.5 and hope that they are going to be prepared for the Miami defense. With good game planning and establishing the run early, I don't think it would surprise anyone if Michigan State came away with the victory. 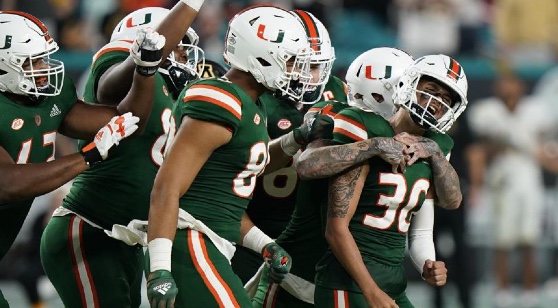 Considering the non-conference nature of this matchup, neither of these teams have much head-to-head data. Michigan State is coming into this game 2-0 against the spread, while Miami is coming in 0-2 losing to Alabama and not covering against App State.

Miami may have buckled against a great Alabama team, but are garnering a lot of unnecessary hate. They didn't crush in Week 2 but they got the victory. Win or lose, I think we really learn a lot about what both of these teams are made of. Bowl season isn't here yet, but games like this have lasting consequences.