One of the most intimidating and physical defenses in the country might be licking its chops at
the thought of swallowing up UNLV’s offense. The San Diego State Aztecs hit the road for a
11:30 p.m. ET Friday night kick on CBSSN.

Two teams in the complete opposite side of the spectrum when it comes to success and failure.
The Aztecs have one of the best run defenses in the country, but they do give up some yards in
the air. Fortunately for SDSU, the Rebels aren’t in the business of lighting up pass defenses.

SDSU is going up against the 190th total offense in the country, meaning they will suffocate the
Rebels faster than a boa. Much like their defense, SDSU physically imposes their will on the
ground. They are just over 190 yards on the ground per-game.

Don’t look now but the Running Rebels have won two straight. This after losing their first eight
football games. They posted wins at New Mexico and home against Hawaii, hardly the caliber of
opponent they welcome on Friday night. The Rebels only true hope in staying in this game is
their opponent is just off throwing the ball.

It could happen as the Aztecs only manage 141
passing yards per-game – 217th in the country. UNLV will have to pressure on passing downs,
but that leaves their 162nd ranked defense vulnerable. We do know that the Aztecs may not be
able to blow many teams out, so the under looks most appetizing.

Lucas Johnson is the Aztecs regular starter at QB throwing for 801 yards and 6 TDs to 3 INTs.
Greg Bell leads the team in rushing with 847 yards and 7 scores on the ground. Chance Bell and
Kaegun Williams have each added over 200 yards rushing on the season.

Johnson doesn’t throw
a lot, but has found both TE Daniel Bellinger and WR Elijah Kothe the most. Bellinger leads the
team with 283 yards, just ahead of Kothe’s 250. They only have three combined TDs in the air.

Cameron Friel leads the Rebels with 1531 passing yards and 6 TDs to 10 INTs. Charles Williams
has played every game and leads the team with 1084 rushing yards. Williams also has 13 scores
on the ground. Nobody else is even close to Williams who is the bell cow back for UNLV. Kyle
Williams and Steve Jenkins each are over 500 receiving yards - combining for 6 receiving TDs.
No other player on the Rebels has over 150 receiving yards. 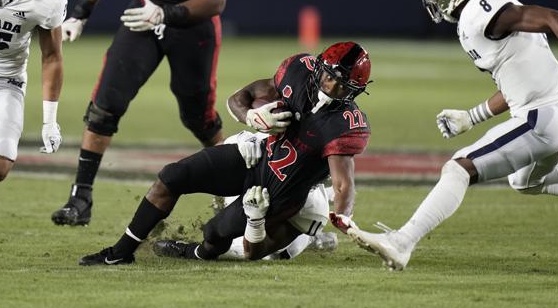 San Diego State has covered the spread in five of its last seven games when facing UNLV in Las Vegas. (AP)

Inside the Stats - UNLV Rebels

UNLV’s record ATS reflects poorer opponents on a more consistent basis. If this is a trap game
for the Aztecs in not covering – they will certainly win – then I’m guilty. The tempo will be
controlled by the Aztecs rushing and stopping the rush. UNLV won’t be able to throw all over
the field and will be stopped from trying to get anything on the ground.

The under for SDSU has
hit in three of their last four games and should be a good indicator of how this game script will
go. The Rebels may have momentum from winning their past two games but will run into a
buzzsaw when they host the Aztects.