The Bulls won't be bowling this season, and they can blame themselves. Buffalo was positioned to make a run for a fourth consecutive season, sitting at 4-4 heading into its home game against Bowling Green on Oct. 30. Buffalo was trucked 56-44 at home, losing outright as 13.5-point favorites, and that touched off a three-game losing skid with the defense forgetting how to cover and tackle. Buffalo suffered a 45-18 loss at Miami (Ohio) on Nov. 9, and they lost a heartbreaker against Northern Illinois last Wednesday, falling 33-27 in overtime. While Bulls fans might not like how things have materialized, OVER bettors certainly have enjoyed the defensive inefficiency, as the OVER is a perfect 3-0 in the past three games.

The Cardinals are still alive for a postseason game, but they need to win this game first. If they lose, there will be no airplane trip to a sunny and warmer location like Boca Raton, Fla. or Nassau in The Bahamas, or perhaps Mobile, Ala. for a bowl game.

Ball State has frittered away its opportunity at clinching bowl eligibility in each of the past two games, falling at Northern Illinois on Nov. 10 by way of a last-second field goal for the Huskies. Then came last week, and Ball State was dominated by a red-hot Central Michigan offense, losing at Scheumann by a 37-17 score. Unlike Buffalo, it's been all about lower scoring games, and Ball State enters on a 4-0 UNDER run dating back to Oct. 30.

The Bulls covered two of their first three games back in September, including a near-miss against a ranked Coastal Carolina team on Sept. 18 in Buffalo. Ever since, the Bulls have been a favorite of bettors fading them. Buffalo is 1-6-1 ATS across the past eight games, with its lone cover their most recent victory at Akron on Oct. 23. That's the only cover since mid-September. The OVER has connected in three in a row for Buffalo, allowing 33, 45 and 56 across the past three outings, while going for 44, 18 and 27 on offense.

Buffalo piled up 222 rushing yards against NIU last week, and running the football never seems to be a problem for the Bulls. Buffalo put up a good fight against the MAC West Division champion Huskies last week, but stopping the run was equally difficult. The Bulls were trampled for 308 yards on the ground, and 505 total yards overall, and the Huskies had 25 first downs to just 19 for the Bulls. Other than that, it was a fairly even game, and the Bulls almost kept hope alive for a bowl. Almost.

The only team in the Mid-American Conference with a worse ATS mark than the Bulls (3-7-1 ATS) is the Cardinals. Ball State has a MAC-worst 3-8 ATS mark, including 0-4 ATS in the previous four outings. It's been a tale of three seasons for Ball State actually. It started 1-3 SU/0-4 ATS in the first four games, before a 3-0 SU/ATS run from Oct. 2-16. But it's gone south again for the Cardinals, going 1-3 SU/0-4 ATS across the past four since Oct. 23. 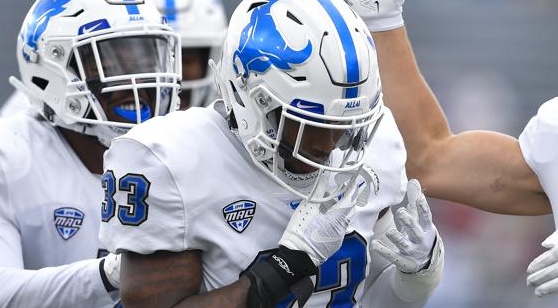 Buffalo has allowed 44.7 PPG across the past three games, all OVER results. (AP)

Inside the Stats - Buffalo Bulls

Inside the Stats - Ball State Cardinals

We've had plenty of UNDER results lately for Ball State, but Buffalo has hit the OVER in three in a row. And OVER is the trend when these teams get together, too, cashing in each of the past five meetings in Muncie. The underdog is a perfect 6-0 ATS in the previous six meetings, so that bodes well for the Bulls, too.

Buffalo is catching nearly a touchdown in this one, as they look to keep it close and perhaps spoil the season of Ball State and keep the Cardinals from going to a bowl. This is basically Buffalo's bowl game now. The strength of the Bulls is running the football, and the Cardinals aren't terribly good at stopping the run. This is going to be a very close game, and if Ball State wins, it's going to be by the slimmest of margins.