The Western Michigan Broncos (6-5, 3-4) take on the Northern Illinois Huskies (8-3, 6-1) get together at Huskie Stadium on Tuesday night in DeKalb, Ill. Kickoff is scheduled for 7 p.m. ET, and the game can be viewed on ESPNU.

The Broncos lost a heartbreaker last week against rival Eastern Michigan on that ridiculous gray fieldturf at Rynearson Stadium in Ypsilanti. Western Michigan was dropped 22-21, losing outright as a six-point favorite. Luckily for the Broncos, they already secured bowl eligibility on Nov. 9 in a 45-40 win over Akron the week before. And while the loss was rather disappointing, the 22 points allowed by the Broncos was the lowest amount since a 24-17 win at Buffalo on Oct. 2. So at least the defensive effort is promising heading into the regular season finale.

According to Jerry Palm of CBSSports.com, Western Michigan could be headed for the Birmingham Bowl against South Carolina of the SEC, although that's not quite written in stone just yet.

For Northern Illinois, it punched its ticket to the MAC Championship Game at Ford Field in Detroit for next week, win or lose in this game at home. The Huskies are projected to the First Responder Bowl in Dallas on Dec. 28 against Houston, although there are still quite a few moving parts before those plans are cemented.

The Huskies started the season 1-2 SU/1-1-1 ATS in the first three games of the season, including non-conference setbacks to Wyoming and Michigan. Since Sept. 25, Northern Illinois has picked up seven victories in eight games, losing only at Kent State on Nov. 3, 52-47. They could meet the Golden Flashes again in Detroit for the title game, as Kent State and Miami (Ohio) play Wednesday night for the East Division title at Dix Stadium. We'll preview that one for you tomorrow, too.

Western Michigan has piled up 447.5 total yards per game to rank 25th in the NFL, and the Broncos will try and use a balanced offense to finish the regular season on a high note. The Broncos rank 47th with 254.3 passing yards per game, and 37th with 193.3 rushing yards per contest. It's rather surprising that that has translated to just 29.8 PPG, which is good for 60th in the NFL. Defensively, WMU is pretty solid, too, ranking 34th in total yards allowed with 342.5 per game, and 32nd against the pass with 207.2 yards per game allowed. They're also 42nd in rushing yards yielded at 135.4, yet they cough up 29.3 PPG, good for 89th. The numbers just don't make a lot of sense.

As far as the total, Western has cashed the UNDER in five of the past six road games, while going 4-0 in the past four as a road favorite. The UNDER is also 4-1 in the past five against teams with a winning overall record, too.

Northern Illinois has just been finding a way to win lately. The Huskies sunk Ball State on a field goal with no time left on the clock in DeKalb two weeks ago, and then won on a touchdown in overtime last week in Buffalo, 33-27. Consistency has been key for NIU, especially on offense, going for 33, 30, 47, 39 and 34 across the past five games, and it's no surprise the OVER is 4-1 during that span. Of course, NIU has allowed 27, 29, 52, 38 and 26 during the stretch, too.

While the trends are great, how hungry will the Huskies be to win at home, even on Senior Day, with the West Division already sewn up. Psychologically, yes, the Huskies want to finish up strong, but there isn't that carrot, as they are going to the title game regardless, and the bowl they go to really hinges on the result of the MAC title game, not so much this one. A letdown wouldn't be shocking here. 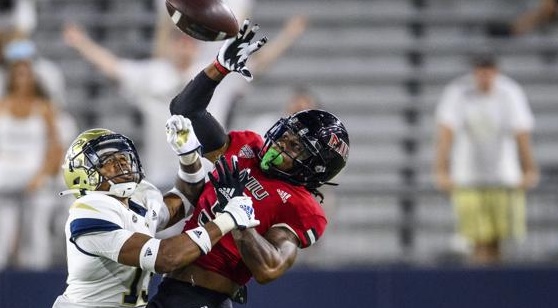 Northern Illinois is 2-8 ATS in the past 10 home games against a team with a winning road record. (AP)

Inside the Stats - Western Michigan Broncos

Inside the Stats - Northern Illinois Huskies

This game reminds me of the NFL, at least in the past, when we've had one team wrap up a spot in the playoffs, and their seeding cannot be up or down. So perhaps they rest some key players in the final game, or maybe don't play as hard with nothing really to play for. I am not saying Northern Illinois is going to rest key personnel for the entire game, or even at all, but I am not think they're going to be playing with the same kind of desperation we've seen the past two weeks with the goal of winning the West Division. They wrapped up the division title in Buffalo with an overtime win, and they cannot lose their spot in the MAC Championship Game by losing here.

Western Michigan is angry after losing to their rivals at Eastern Michigan, and now have to finish on the road against another tough foe. The Broncos have something to prove to bowl committees, as well as fans, alumni, and more importantly, to each other. And looking at the numbers, it's rather surprising that NIU has allowed more points than they have scored this season, while Western has scored more than they have allowed.