Ugly effort all the way around with last week's plays on the golf course, as it was one of those weeks where you've just got to take it on the chin and move on.

Possibly a little unlucky to not get the “yes” on the playoff to cash, but the read was completely off for the whole week, and you always hope for that luck to get “made up” when you are close to a monster.

So it's back to the grind this week at a familiar place for the PGA pros and handicappers alike, as Pebble Beach is the stop on the circuit for the annual Pro-Am event.

No real secrets about a Tour stop at Pebble Beach, although this event does see the Spyglass Hill course used for one round early too. It's all about the wind at this venue though, as if it's down guys are just worried about hitting their spots.

If it's up, it's about worrying about where your ball is going to land on each stroke and remembering that Par is always going to be a good score.

Ball striking in the approach and a hot putter are going to be how guys separate themselves, as the lack of speed on the greens here keep everyone involved.

No matter the weather, having been through many of the elements and conditions at Pebble Beach can definitely help, but if the event stays calm for the majority, the lack of length here can have even newcomers going really low.

But course history plays here, and can mean more in those windy conditions, as guys who've found good results here in the past tend to do so throughout their careers. Not unlike last week by any means. Hopefully this week's results turn out a bit better though. 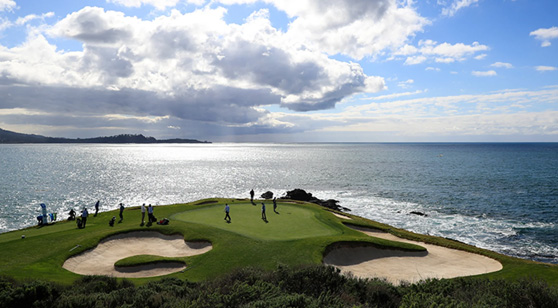 The PGA Tour continues its West Coast swing this weekend at the AT&T Pebble Beach Pro Am in California. (AP)

However, Johnson announced his withdrawal from the AT&T Pebble Beach Pro-Am late Monday night after the victory in Saudi Arabia.

Not sure it matters how hot you've been, or who you are, that's a pre-tournament price that's easy to not get involved with and it's good to see him sitting out this week.

Berger's probably got the best resume of that bunch at this event, with a 5th and 10th in two starts since 2015, but he did miss the cut last week after two bogeys in his final five holes dropped him below the grade.

Hard to hold that against Berger completely given his quality finishes in recent starts before last week, and then it becomes a matter of being willing to take that price with him.

And despite all the positives those names at the top bring in terms of skills to every event they enter, the pre-tournament selections have to start with some bigger prices.

The name just below those guys is the most obvious place to start, and like most are likely to have this week, the first name has to be Jason Day.

Contender to Back
AT&T Pebble Beach Pro Am

Day's track record here is always going to be the first thing that's easy to see, as he's not finished worse than 5th here in each of the past four years. Throw in two more Top-6 finishes, a missed cut, and an 11th in the four years prior to that, and it's clear Day loves to tee it up at this event.

Given he's coming off consecutive missed cuts the past two weeks, a return to Pebble Beach may be exactly what he needs. Slow greens that are comfortable to his eye should help after he was -2.62 in Strokes Gained: Putting last week in what cost him a weekend tee time. Can't imagine his putter stays that cold at this venue, because the rest of his game has been improving.

While 30/1 would've been nicer (with DJ), his 21/1 price tag does seem a little cheap for a guy with Day's record here, and DJ's dominance at the top plays a big part in that.

But I think we see Day hang around to make some noise on the weekend, and having him already in pocket could open up other betting paths should he be somewhere in the hunt again.

Davis is a guy that's better for top placement finishes in all likelihood (Top 10/20 etc), as his win rate with the top end of this field may not completely equal this price. But he's another guy who's had his game round into form in recent weeks.

Davis has been lighting it up in the approach game in recent starts, gaining 2.2 strokes on the field in approach at the Farmers Insurance Open, after gaining 1.4 and 1.8 in that category in two of his previous three starts before that. You strike the ball like that at Pebble Beach and the birdies will come.

Putting has been the issue for Davis when things go sour though, but he did have that 3rd at the American Express in January. That week saw Davis put it together with the flatstick (+1.8 SG: Putting), and maybe a week off was needed to recalibrate.

Davis has gone from finishing missing the cut, to finishing 59th, to 38th at this event the past three years, and he's arguably never been playing as well as he has been coming into it as he is this year. The outright win might be a little frisky, but I expect him to have a quality showing this week.

Kizzire is another guy who's starting to see more and more positives consistently show up in his game each week. Putting is actually one of his stronger suits which is different from the other two at the moment, and the ball striking is there, the consistency just isn't.

But it has been slowly showing up more and more, as he's not killing himself relative to the field in the approach game as he had been oftentimes. Three Top 11 finishes in his last six starts will attest to that, and a week where Kizzire finds a way to put it all together for 3+ rounds appears to be coming.

I'll take a shot with him here at these odds, hoping that an already good putter gains an even bigger edge on these slower greens.

He's gained nearly a stroke on the field with the putter in three of his last four starts, and only once in his past seven starts has he lost strokes on the greens to the field. That alone should keep him around in contention, and if the irons heat up, who knows.

If experience plays is going to be part of the approach this week, backing Mickelson as an underdog only makes sense.

There probably aren't too many more spectacular finishes for Mickelson on the PGA Tour, but at a place where he's had four Top 3's in the past five years, and won twice in the past decade, I'll take a dog price on him in this matchup.

Distance isn't going to be an issue for him here, so cranking down the clubs can help with accuracy for Phil, enabling that short game to start putting up under par numbers rather than scrambling to save a par. Any conditions that come the way of the players this week will be ones Mickelson's seen before, and I don't mind having that on my side as well.

Knox's history at this event is far from bad – Three missed cuts and finishes of 14th, 15th, 27th , and 28th since 2012 – but two missed cuts in his last four starts has his recent form on some shaky ground as well.

Most other courses I wouldn't even consider this matchup, but for how many times Mickelson has walked these 18 holes, him being the underdog was good enough for me to bite.

Course history is not the angle with Hickok as he's had a missed cut and a withdrawal here the past two years. But similar to Davis and Kizzire – two other guys that make a lot of sense to play Top 40 with – Hickok's overall game has been trending in the right direction, he's just trying to consistently put it all together.

A missed cut last time out at the Farmers wasn't an awful performance, and it came on the heels of finishing 21st and 19th in his previous two starts.

Short game concerns still pop up far too often to consider Top 10's or anything like that, but Hickok has recently shown he's able to be Top 20 in similar caliber fields, especially when distance (he averages just 294.5 yards off the tee) isn't a concern.

Accuracy is the blueprint behind his success, and should his proximity to the pin numbers here be good, maybe that putter can be quality enough to make a serious run. Taking this nice cushion at that price is the way to approach it though.