This week features the QBE Shootout at the Tiburon Golf Course at the Ritz-Carlton Golf Resort in Naples, Fla., playing for a purse of $3.6 million. This is a team event, and the winners will not receive 500 FedEx Cup points in the standings. We have a total of 24 golfers in the field, or 12 total teams competing for the overall prize.

This 3-day, 54-hole stroke play event has kept the same format since 2014. Harris English and Matt Kuchar posted an event-record 179/37-Under to win by nine strokes over Rory Sabbatini and Kevin Tway in last season’s event.

The Tiburon Golf Course plays at 7,288 yards, or 6,664 meters for our metric friends, at Par 72 on the gold course. And like most course in the tropics, we get Bermuda grass putting surfaces, similar to last week’s Hero World Challenge, the RSM Classic, the Bermuda Championship, Mayakoba, etc.

For this specific event, it’s a shortened field of just 24 total golfers or 12 teams, so there aren’t a lot of props. There are some interesting values, however. 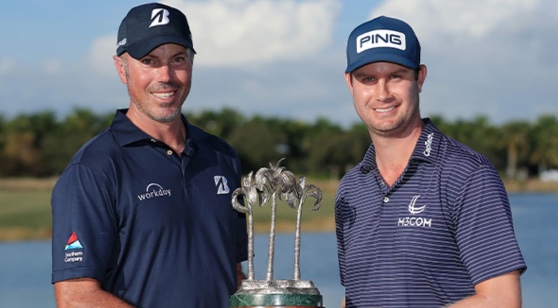 First off, you have to love history, and what a duo has been able to accomplish, rather than two golfers feeling each other out for the first time.

According to BetMGM, three golf teams have winning odds at or under +700, with Sam Burns/Billy Horschel (+400) the chalk, followed closely by Jason Kokrak/Kevin Na (+550) and Harris English/Matt Kuchar (+650), the defending champs. Jason Day/Marc Leishman (+750), Max Homa/Kevin Kisner (+800) are the next groups, with Corey Conners/Graeme McDowell, Matt Jones/Ryan Palmer and Ian Poulter/Charles Howell III (+1100) in the next betting group.

Ryan Palmer paired with Harold Varner III last season, and now he gets Matt Jones. Those new partner pairings are not terribly attractive from a betting perspective. Palmer and HV3 ended up finishing in 10th place, 15 strokes off the pace, although they did get one of those big Happy Gilmore checks for $90,000 each, which will buy a lot of sub sandwiches.

Marc Leishman pairs up with Jason Day this season, after playing with another fellow Aussie, Cameron Smith, last season. Leishman/Day ended up tumbling to eighth place in last season’s event, and again, new partner pairing, even though these guys know each other well.

2021 QBE Shootout Contender to Back

Jason Kokrak/Kevin Na (+550) are a new team pairing, but I like what Na did in this event last season. He split up with Sean O’Hair, who will now be playing with Will Zalatoris. Na and O’Hair were a T2 last season, posting a 56 in the first round to fire out of the chute. It’s interesting that they are paired together again, but Kokrak has been hot, and he won the Hewlett Packard Enterprise Houston Open back in early November.

He is playing with a lot of confidence, and Na has the good history in Naples. I think Strokes Gained: Putting is going to be the key to victory this week, and Kokrak ranks higher than anybody in the field with 1.109 in 10 measured rounds so far this season.

I don’t believe they have a legit shot to win this thing, but Lexi Thompson/Bubba Watson (+550) represents a tremendous value as the longest odds on the Top 3 board. And remember, all ties are paid out in full, so there’s that. Thompson has played in the QBE on four different occasions, and Watson was T5 last season paired with Louis Oosthuizen.

Thompson missed last season’s event due to a conflict with the U.S. Women’s Open, but she is back for the first time since 2019, when she paired with O’Hair. In 2017, she teamed up with Tony Finau, and managed a fourth-place finish, her best in four appearances since 2016. At this price, why not?

Speaking of O’Hair/Zalatoris (+260), I like O’Hair’s SG: Putting numbers at .660 in eight rounds so far this season. It’s not a great sample size, but remember, he was also T2 at this event last season, too.