Game 2 of the ALDS matchup between the Chicago White Sox and the Houston Astros is set for Friday, October 8 for an afternoon start time of 2:07 p.m. ET.. The game will air on MLB Network from Minute Maid Park in Houston, Texas.

The first full day of action in the MLB playoffs will start with the Houston Astros hosting the Chicago White Sox in Game 2 of their series. Houston is a slight favorite in its series against the South Siders, as the Astros have home field advantage and plenty of postseason experience.

Lucas Giolito will lift Chicago to a win over Houston in Game 2 of the ALDS. Giolito has been remarkably consistent over the last three seasons, and he has the poise needed to win on the road in the playoffs.

Houston’s offense had some trouble scoring runs over the last couple weeks. The Astros went seven straight games without scoring more than four runs before lighting up Oakland in their last series of the regular season. 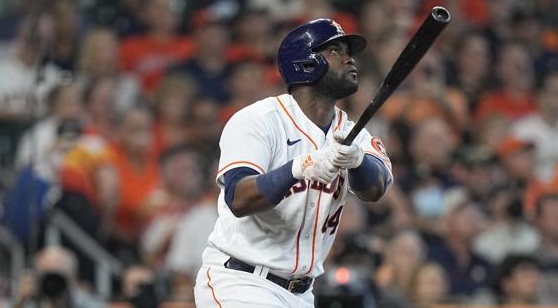 The favorite has won six straight games played between the Chicago White Sox and the Houston Astros. (AP)

Lucas Giolito starts Game 2 for the Chicago White Sox, trying to even the series as underdogs with his team trailing 1-0. (AP)

Giolito has put together another solid season. He led the White Sox in innings pitched, and he posted an 11-9 record. His 1.10 WHIP and 3.53 ERA were third-best among starters on the team behind Game 1 starter Lance Lynn and the injured Carlos Rodon. Chicago has won each of Giolito’s last five starts, and he pitched a complete game gem in his one start against the Astros.

That isn’t the only thing to like about the White Sox on Friday. Tim Anderson is one of the most dangerous leadoff hitters in baseball. Anderson led the team with 18 stolen bases in the regular season, and he will likely test Houston on the basepaths. His .309 batting average was the second-best on the team too.

Jose Abreu hasn’t been as great as he was when he won the AL MVP last year, but he led the team with 30 home runs. Abreu finished the season with nearly twice as many RBIs as the next closest Chicago player, and he will make Houston’s pitchers pay if they leave one out over the plate.

Luis Robert is one of the most exciting young players in baseball. Robert came alive over the last two months after missing most of the season with an injury, and he finished with a .946 OPS in 68 games. That’s why the White Sox gave him $76 million before he ever reached the majors.

The Astros will call upon Framber Valdez to start Game 2. Zack Greinke has not pitched well over the last month, so Valdez will take the ball.

Valdez is 11-6 with a 1.25 WHIP and a 3.14 ERA in 134.2 innings of work. His 8.4 K/9 isn’t great for a starting pitcher, and he hasn’t fared too well in two starts against the White Sox. He allowed six earned runs and three home runs in 13.1 innings, and that was when Chicago was missing some of its most dangerous hitters from the lineup.

Kyle Tucker has had a superb season with the Astros. He led the team with a .917 OPS, and his 14 stolen bases were the most on Houston after Myles Straw was traded to Cleveland. This is the third straight season where Tucker has posted at least an .835 OPS, and his 5.7 WAR was the second-best on the team.

We haven’t seen a lot of speed out of Jose Altuve this season, but Houston’s lead-off hitter has plenty of pop. Altuve finished the season with 31 home runs, as he gets the most out of his 5’6 frame.

Carlos Correa led the Astros with a 7.2 WAR. Correa played great defense at shortstop while also hitting 26 home runs and posting an .850 OPS. He was the Astros’ best hitter last postseason with a 1.221 OPS in 13 games.