The first round of the NBA playoffs will tip off Monday afternoon with a Western Conference showdown between the (6) Utah Jazz and the (3) Denver Nuggets.

Denver opened as a three-point favorite for this game but the early money came in on the Jazz as we saw this line fall to 2.5 Saturday night, but as of Sunday morning, the line had bounced back up to -4.5 for the Nuggets.

The total for this contest opened at 220.5, but since that line has been on the board, it has steadily plummeted all the way down to 215.5, with all the early action coming in on the under. 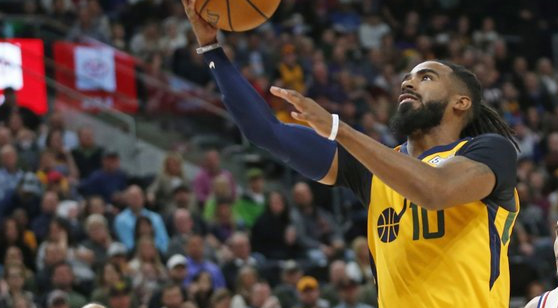 The Utah Jazz won't have point guard Mike Conley in the lineup on Monday as the point guard has left the NBA Bubble. (AP)

The Utah Jazz enter Monday afternoon’s contest holding a 3-5 record in the bubble (0-5 against playoff teams), with their only wins coming against the Pelicans, Grizzlies, and Spurs.

Denver has also struggled in Orlando, tallying a 3-5 record as well, but at least have two wins over playoff teams. That includes their double-overtime win over the Jazz.

With the exception of Donovan Mitchell at times, the Jazz have not been good offensively in Orlando. The club went under their season average of points per game (111.34) in five out of their eight contests in regulation (101 points before OT vs DEN).

The Nuggets haven’t had the same struggles offensively, but their defense has suffered without the help of Gary Harris and Will Barton, causing their game totals to go over in all eight contests in Orlando.

The Jazz have covered +4.5 in two out of their their losses to the Nuggets this season, and the 'under' has hit in two of three in this series with the only 'over' coming in a double-overtime game.