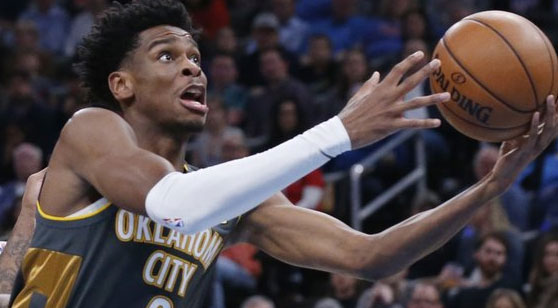 The Thunder are favored in Game 1 but Oklahoma City is listed as an underdog to win the series. (AP)

The Rockets and Thunder finished with the same exact record on the season, although Houston is listed as the fourth seed. It's no surprise that the Rockets were a top-four seed in the Western Conference, but the Thunder entered the season with a win total of 32 after the departures of Russell Westbrook and Paul George in the offseason.

However, Chris Paul reignited his career after getting traded from Houston to Oklahoma City for Westbrook and will see his former team in the opening round of the playoffs. The Thunder also put together the best ATS record in the league at 44-28, which included 26 covers away from Oklahoma City. Inside the bubble, the Thunder won three games by double-digits, including an impressive blowouts of the Lakers and Jazz. Also, OKC lost two games in overtime to the Nuggets and Clippers, as the Thunder finished 1.5 games behind Denver for the third seed in the West.

Houston has advanced past the first round of the playoffs in each of the last three seasons, as the Rockets are seeded in the top four of the West for the fourth straight season. Westbrook is sidelined with a quad injury for at least the series opener against his old squad and is questionable for Game 2. The combination of Westbrook and James Harden put up over 60 points per game, which is the highest among any scoring duo in the league. Harden led the NBA in scoring at 34.3 ppg for the third consecutive season, while topping the 40-point mark twice in the bubble. The Rockets began the bubble with wins in four of their first five games, but dropped their final three contests, including the final two without Westbrook.