The Eastern Conference first round matchup between No. 2 Toronto Raptors and No. 7 Brooklyn Nets will continue on Wednesday as the pair meet in an afternoon matinee from the NBA Bubble in Atlanta.

The Raptors opened as 11-point favorites for Game 2 and most books quickly added the hook and pushed Toronto up to 11 ½.

Toronto entered this series as a -5000 favorite to win and that number is as high as -20000 on the Raptors. Put simply, every $200 wagered on Toronto would return you one dollar. For those that believe Brooklyn can win four against the Raptors, then you can grab odds as high as 50/1.

The defending NBA Champion Toronto Raptors looked every bit the part on Monday as the club dominated the Brooklyn Nets 134-110 in the opening game of their first-round playoff series on Monday.

The Raptors couldn’t miss from the outside, finishing the game with a blistering 22-of-44 performance (50%) from 3-point land. Fred VanVleet led the charge with 30 points as the former Wichita State standout was 8 of 10 from beyond the arc. VanVleet also finished with a team-high 11 assists.

Even more impressive from Toronto was its shooting from the charity stripe. The club went 32-of-33 (97%) from the free-throw line while Brooklyn only mustered up 16 trips, making just 11 freebies.

Toronto had seven players score in double figures, including all five starters while the bench combined for 45 points.

Brooklyn cut the lead to eight points (90-82) late in the third quarter but it couldn’t keep the momentum going and Toronto went on another crazy run and the Nets wouldn’t threaten again. The Nets were led by Timothe Luwawu-Cabarrot, who scored 26 points off the bench as the game was out of hand.

The 2020 NBA Playoffs started off with a clear-cut result for bettors as Toronto helped bettors riding the ‘chalk’ cash a plethora of wagers.

The Raptors covered the game, first quarter, first-half and even though they gave the Nets a little life in the third quarter, Toronto closed with a 39-24 fourth quarter and cashed second-half wagers too.

Anybody who played the ‘under’ at any point during Game 1 was dead in the water as Toronto couldn’t miss from distance.

Nets vs. Raptors
How to Handicap Game 2

Brooklyn entered the NBA Bubble short-handed and despite the talent gap and lack of experience, it’s put on a great effort. The club is 5-4 both SU and ATS after Monday’s loss but it’s clearly evident that if the Nets don’t shoot a ridiculous percentage from the field, they don’t have any chance to win.

While the Raptors lit it up in Game 1, the Nets defense can’t match up with Toronto or any team that’s filled with shooters. In their four losses in the NBA Bubble, Brooklyn has allowed 136.4 PPG.

Expecting Brooklyn to take a game from Toronto in this series is a tough argument but the inflated spread could have you taking the points. Brooklyn has gone 2-2 SU and 3-1 ATS this season when listed as a double-digit underdog and that includes a recent 134-133 setback to Portland. The Nets closed as 10 ½-point ‘dogs in that game.

Despite losing NBA Finals MVP Kawhi Leonard in the offseason, the defending champions are legit contenders and they’ve proven that since the NBA Bubble began. Including the Game 1 win, Toronto is now 8-1 SU and 7-2 ATS in games played at Orlando. 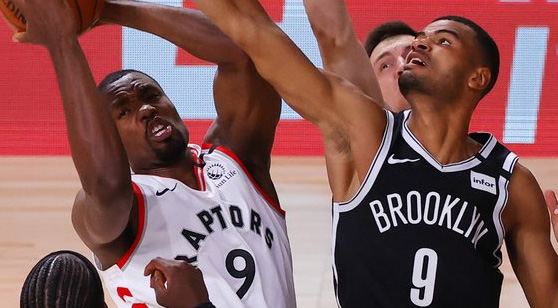 The Raptors scored 134 points against the Nets in Game 1 on Monday, which was their highest point total in their NBA Bubble games. (AP).

The 134-point outburst in Game 1 was certainly an anomaly as Toronto is only averaging 113.1 points per game in Orlando. Even if the offense doesn’t show up, head coach Nick Nurse and company can rely on their defense which has only surrendered 106.7 PPG in the NBA Bubble.

Toronto has gone 37-4 against teams with losing records this season and its dominance over Brooklyn goes back five seasons. The Raptors are 18-2 in the last 20 versus the Nets and that includes a solid 60 percent record (12-8) versus the number.

The Nets said that Jamal Crawford will likely miss the first few games of this first round against Toronto.

We expect Toronto to cruise to a 2-0 series lead on Tuesday but in a different fashion, this time with defense. The Raptors are the best defensive team in the NBA (106.6 PPG) and it was a large part of their success during last year’s championship run. Total bettors watched the ‘under’ go 14-9-1 in last year's postseason. We're leaning to the 'under' on Wednesday. The Raptors will easily break the century mark on the Nets but expecting Brooklyn to keep up is a tough ask.