The fourth-seeded Indiana Pacers will be looking to even up their opening round series against the fifth seeded Miami Heat on Thursday when the pair square off in Game 2 of their NBA Playoff first round matchup from Orlando, Florida.

The oddsmakers have indicated they feel comfortable with the line they set in game one, and we are seeing a similar trend in line movement for game two, as Miami opened as five and a half point favorites and Pacers bettors bringing have knocked the spread down to four and a half in favor of the Heat at most books.

‘Under’ bettors cashed tickets in Tuesday night’s affair, but they sweat it out as the total OU closed at 216.0 for game one, and these teams combined for 214 points in Miami’s 113-101 victory. Thursday night’s contest sits at 215.0 at most books, exactly one point higher than the previous contest’s total.

Indiana has now jumped up to a +500 underdog to advance to the 2nd round of the Eastern Conference Playoffs, after opening at +240, indicating the confidence the oddsmakers have in the Heat after their statement win in game one.

Miami’s All-Star shooting guard, Jimmy Butler, tried to clear the air prior to game one regarding his and TJ Warren’s beef coming into the series, but after seeing the look in Jimmy’s eyes down the stretch in the first game, it is clear he still has the hole in his heart for Indiana he had going into the bubble, entering the 4th quarter with a one-point lead, then scoring 10 points in the final minutes, burying the Pacers and winning the final quarter by an 11-point margin.

Butler out-dueled Warren 28-22 on the scoreboard and tallied four rebounds and 3 assists in Miami’s 113-101 game one victory. Goran Dragic got the playoff start on Tuesday and made a night out of it, complementing Jimmy’s 28 points with 24 points of his own along with six rebounds and five assists.

It took them a little while to find their rhythm, but the Brogdon-Warren duo finished the game with 22 points each, and will likely need to contribute more than that on Thursday, now with Victor Oladipo 'questionable' for tonight’s tilt already down in an 0-1 hole. 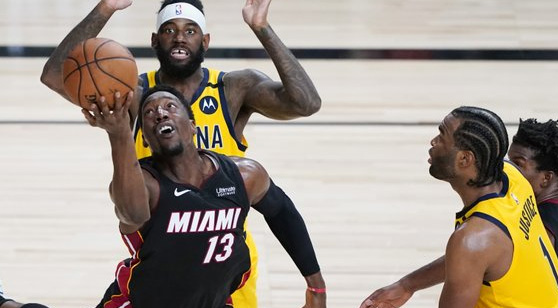 The Miami Heat outscored the Indiana Pacers by 21 combined points in the second and fourth quarters in their Game 1 victory. (AP)

The Pacers won the first (33-27) and third (28-25) quarters in Game 1 but the Heat outscored them by 21 points in the second and fourth quarters. Indiana's inability to make any shots in the final 12 minutes helped bettors playing the 'under' for both the game and second-half.

Heat vs. Pacers
How to Handicap Game 2

The ‘under’ cashed in game one, but it was no thanks to Miami, as there were times during the contest when things were looking gloom for ‘under’ bettors, as the Heat finished the game with 113 points, and the offense looked fluent for the majority of the game.

No Kendrick Nunn, no problem for the Heat as Butler and Dragic combined for 52 points in game one for the Miami’s backcourt, while Nunn did not see the floor on Tuesday after starting the majority of the games for them during regular season.

Miami got behind the 8-ball early in the first contest in this series, trailing the Pacers 33-27 at the end of the first quarter in game one. The key for the Heat in game two should be to come out of the gate playing tight defense early, and for Butler and Dragic to establish their dominance over Brogdon and company.

Malcom Brogdon, Warren, and Aaron Holiday came out shooting in game one, the trio tallying a combined 21 points in the first quarter on Tuesday, jumping out to an early six-point lead.

That was short lived though, as Butler and company turned it around defensively in the 2nd quarter, holding the Pacers to just 19 points and stealing a four-point lead heading into the half.

Brogdon and Warren ended up finishing the contest with 44 of the Pacer’s 101 total points, partly because of the early exit from Oladipo, but they are going to need more out of their supporting cast if they are going to get it done in game two. Indiana got outscored from three-point land in game one 30-39, and if they want any shot at game two, they can not allow that to happen.

Domantas Sabonis is set to miss his second straight contest in this series, but the real story here is Oladipo still being listed on the injury report as a game-time decision for game two, after leaving Tuesday’s game with a scratched eye. If Oladipo is unable to go on Thursday, look for Warren and Brogdon to eat up his missing volume again.

After 60 points were scored in the first quarter of game one, these teams averaged just 51.3 points per quarter for the remaining three quarters of this contest. I think this game ends up closer than the previous contest between these two teams due to a dip in production from Miami offensively, but the Heat’s defense should be able to hold up and get the job done, especially if Oladipo doesn’t play. I’m rolling with the ‘under’ here though as I expect to see a low-scoring nail-biter in game two.