With Russell Westbrooks set to miss his second straight game in the opening round of the Western Conference Playoffs, the Rockets open as just two-point favorites after winning game one by a 15-point margin. 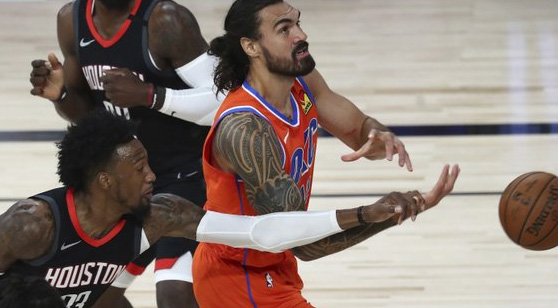 The Houston Rockets have gone from underdogs in Game 1 to favorites in Game 2 in their series versus the Oklahoma City. (AP)

After cashing the ‘over’ by scoring 231 total points in their first contest, the total OU is set for game two 227.5, with not much movement in either direction yet, but make sure to keep track of all the line movements.

Oklahoma City shifted from +120 to +290 underdogs to advance to the second round after getting routed in game one, and will look to even up this series at 1-1 on Thursday evening.

The Rockets were missing one of their All-Star guards in game one of this opening series, leading the line for the first contest to close at -1 in favor of Houston.

But clearly the absence of Westbrook was not missed too dearly, as James Harden went for 37 points over 34 minutes, sitting out the majority of the 4th quarter in the Rockets 123-108 win.

Houston racked up 20 three-point bombs, shooting 38.5 percent from downtown, which is a tough clip to keep up with for a Oklahoma City team that doesn’t shoot the three particularly well.

Chris Paul and Steven Adams combined for 37 points and 22 rebounds, but it simply wasn’t enough as Houston cruised to a game one victory without its second-best player.

It was a wire-to-wire performance for the Houston Rockets in Game 1 as they covered the game, first-quarter, first-half and they even managed to hang around in cash the final 24 minutes too.

Make a note that the teams combined for less than 50 points (48, 44) in both the first and fourth quarters but posted 72 and 67 combined points in the second and third stanzas respectively.

Thunder vs. Rockets
How to Handicap Game 2

It’s back to the drawing board for Paul and company as the Thunder fell to the short-handed version of his old team in the opening game of this playoff series.

CP3 was just one assist shy of a tripledouble on Tuesday night, but clearly it wasn’t even close to being enough as he got outscored by 17 points by his former teammate.

The one real bright spot for Oklahoma City team was Danilo Gallinari, who tallied 29 points, 3 rebounds, and 3 assists in game one utilizing a mismatch all game drawing a Rocket’s guard off the bench defensively.

With no Russ in this game again, ride Gallinari’s points ‘over’ as the Thunder are really going to need their three-point shooters to step up in game two if they intend on keeping this one close.

There were obviously some concerns coming into game one for Houston being without one of their allstar guards, but Harden continues to pacify critics time-after-time with another jaw-dropping performance from the field.

This team is built completely around him, and as long as the Beard is in the lineup, the Rockets will be just fine and they proved that in game one. Harden’s total points line was set at 37.5 for game one, and Coach Mike D’Antoni took him out of the game right as he scored his 37thpoint in the 4th quarter followed by a Thunder timeout.

Look for Harden to go over his total points +rebounds + assists line in this game 2 contest as I expect this game to be closer and for the Beard to tally more minutes.

Aside from Dennis Schroeder having a rough game, I think Oklahoma City got all they possibly could’ve out of their supporting cast, and clearly it still wasn’t enough to get it done against the Beard. Give me the Rockets -2 here to go up 2-0 on OKC with one of their star guards absent.