The NBA Playoffs first round action continues on Sunday with four games and the finale will feature the No. 6 Jazz against the No. 3 Nuggets in their Western Conference opening series.

Denver captured Game 1 but Utah rebounded with back-to-back victories to hold a 2-1 lead as they meet in Game 4 from the NBA Bubble.

After opening as underdogs in the first three games of this Western Conference first round series, the Jazz (-140) opened as money line favorites for the first time against Denver (+130) following Donovan Mitchell and company’s second straight 19+ point victory.

The oddsmakers were cautious with the opening spread (Utah -2), but the public agrees with the swing in favoritism, as we have seen that line climb up to three points at most books.

The ‘over-under’ for this Game 3 tilt opened at 214 total points, but that number is quickly elevated to 216 points following the early action on the ‘over’ on Saturday morning, and continued to see movement throughout the day.

The Jazz fell all the way down to +400 underdogs following their 135-125 Game 1 overtime loss, but now head into Game 4 as -360 favorites as they have really made Denver look like the inferior team in the last two playoff matchups. 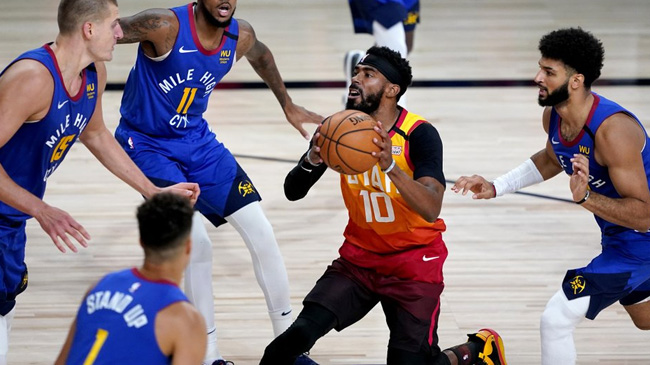 After losing Game 1, the Jazz have rebounded with back-to-back wins to take a 2-1 series lead over the Nuggets. (AP)

The Nuggets were able to come from behind and steal Game 1 of this seven game set in overtime, and if it weren’t for that victory, Denver would be in grave danger of an UGLY four-game sweep in the opening round.

After their losing effort in Game 1, the Jazz rebounded with a dominant 124-105 Game 2 performance on Wednesday, which was followed by a 124-87 rout of Nikola Jokic and company in Game 3 on Friday.

Mike Conley returned to Utah’s starting lineup in Game 3, and it looked like a weight had been lifted off Donovan Mitchell’s shoulders as Conley tallied 27 points in his first game back since the birth of his son, while Mitchell sat out the majority pf the fourth quarter.

The Jazz own a 2-1 series lead heading into Game 4, who appear to just now be putting it all together as a team.

The Jazz posted a wire-to-wire victory in Game 3 for bettors, covering all stanzas of the matchup.

Due to any offensive punch from the Nuggets, the 'under' was never in doubt but total bettors chasing the 'over' in the second-half got there as Utah continued to fill it up.

Nuggets vs. Jazz
How to Handicap Game 4

The Nuggets shot 37.5% from the field and 31.6% from 3-point territory in Game 3, and if they are going to give up 124 points on 51.2% shooting defensively, they are going to have to play much tighter defense than that.

Nikola Jokic had just 13 field goal attempts in Denver’s 124-87 loss on Friday, which is a monstrosity considering their final point tally. If the Nuggets want to turn this thing back around, they MUST get the ball to the Joker’s hands more and play MUCH better defense.

Rudy Gobert is somebody who never gets talked about enough in this league, and he was phenomenal in Game 3 for the Jazz, tallying 24 points and 14 rebounds in Utah’s blowout victory on Friday, while putting out a DPOY-level defensive effort.

The Mitchell-Gobert-Conley trio combined for 71 points on 44.5% shooting last game, nearly outscoring the Nuggets as an entire team. The Jazz have primetime defensive talent, and it finally appeared to come together in Game 3, stifling the Nuggets to just 87 points.

Things will get very simple for Quin Snyder’s team moving forward if he is able to draw that kind of defensive effort out of his team on a nightly basis.

The Jazz got Conley back following the birth of his son, but Denver will still be without Gary Harris and Will Barton who have left bigger holes in the Nuggets defensively than anticipated. If they want to take back control of this series, somebody is going to need to step up and guard Mitchell and Gobert.

The Jazz head into Game 4 with a 2-1 series lead, and -360 favorites to advance to the second round, after scoring 124+ points in all three matchups in this series. Denver has had no answer for Utah defensively, and I expect Snyder’s team to roll again.

Give me the Jazz -3 to put Denver on the ropes heading into Game 5.