The spread for this Game 6 contest opened in the same ballpark of -2.5 Utah as we have seen following the Jazz snatching a 2-1 series lead in Game 3. We haven’t seen a ton of movement in that line as tickets continue to come in, but a few books have knocked Denver down to just two-point underdogs which is something to keep an eye on moving forward.

After cashing ‘over’ tickets in four out of five contests in this series, the oddsmakers continue to climb the ladder on this ‘over-under’, opening at the highest total we have seen between these two teams all year – OU 221. The betting public thought this number was too high out of the gate though, knocking this number down to OU 219.5 at most books.

The Nuggets, who originally opened this series as moderate favorites to advance to the Western Conference second round (-200), now sit as +120 underdogs on the money line with their backs up against the wall down 3-2 heading into Sunday night’s Game 6 affair with the Jazz. 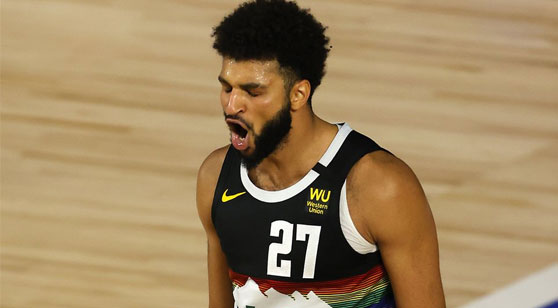 Jamal Murray lifted the Nuggets to a Game 5 victory as Denver looks to stay alive against Utah. (AP)

When Jamal Murray is feeling it, he is the best basketball player on the court when these teams meet up; and that has been the case in the last two games of this series. Ever since Utah grabbed a 2-1 series lead over the Nuggets in Game 3, Murray has averaged 46 points, 7.5 assists, and 9.5 rebounds per game, willing his team to a 117-107 victory by scoring 42 points in Game 5.

With how unexpected Murray’s explosion onto the scene was in the back half of this series, Donovan Mitchell’s statistical outputs are beginning to fly under the radar and starting to look routine, as he has tallied under 30 points just once in this series, and that was during Utah’s 37-point blowout in Game 3 in which he played just 27 minutes.

Despite being down 3-2 in the series, the Nuggets own a 3-2 record ATS in this matchup after a sneaky 129-127 backdoor cover in Game 4; they will look to even up that record SU on Sunday night and force the first Game 7 in the bubble.

Nuggets vs. Jazz
How to Handicap Game 6

The third seeded Nuggets continue to be one of the weirdest teams in the league as they entered this series as favorites, fell to underdogs, and are now charging their way back, trying to force a Game 7 in this opening round. These teams cashed ‘under’ tickets in the majority of their matchups in the regular season this year, but that has not been the case at all in the playoffs, with four out of five of the games in this series soaring ‘over’ the total.

There is a plethora of things working together for Denver right now, including the decrease in offensive usage of Nikola Jokic, causing 12 of their 13 games to go ‘over’ inside the bubble. I think the only way the Nuggets are able to keep up with Mitchell and company and force a Game 7 is by riding the hot hand of Murray on Sunday and winning the contest in another game that goes over the total.

The game plan for Quin Snyder’s team on Sunday must revolve around orchestrating his guard tandem to contain Murray in Game 6, because Jamal has eaten the Utah defense’s lunch the past two games. Statistically speaking, the Jazz are a top ten defensive team in the NBA, but top tier defensive teams don’t allow “non-superstars” to go for 42 and 50 points in consecutive playoff games against them.

Despite entering the series as underdogs and earning a SU series advantage, Utah is still 2-3 ATS in its first round series after Jazz bettors got burned by the Michael Porter Jr. tip-in at the buzzer to conclude Game 4 (129-127 - Utah) and seal the Denver +3 backdoor cover.

I still think the Jazz are the better team in this series and will ultimately advance to the second round. I’m just not comfortable siding with them until I see what the defensive response to Murray’s scoring outbreaks are.

The only contest that has stayed ‘under’ in this series was Utah’s 124-87 rout of the Nuggets in Game 3. I think we will see another hard-fought contest come down to the wire on Sunday with Mitchell and Murray dueling it out down the stretch again, scoring a lot of points in the fourth quarter.