The first Game 7 of the NBA Bubble will take place on Tuesday Sept. 1 from Orlando, Florida as the No. 3 Denver Nuggets meet the No. 6 Utah Jazz in their first round series finale.

This best-of-seven battle has been a series of runs. Denver captured Game 1 in overtime (135-125) before Utah rebounded with three consecutive victories behind an offense averaging 125.6 points per game.

Then, Denver found its defense and it ended up winning Game 5 and 6 while holding the Jazz to 107 in each of its two victories.

For those wondering, NBA Game 7's have been dominated by the home team (105-28) but that number could be tossed out due to these games being played on a neutral court.

The third-seeded Denver Nuggets have forced the first Game 7 of this year’s NBA season on Tuesday against the sixth-seeded Utah Jazz, who are riding the coattail of Jamal Murray’s second 50-point explosion of the calendar week. Mike Malone’s team has walked away victorious in its last two contests against the Jazz, but Utah heads into Game 7 with a one-point edge at most books, despite the betting public favoring the Nuggets early.

After cashing ‘over’ tickets in five out of six contests so far in this series, the oddsmakers set the ‘over-under’ for Game 7 at the maximum total for this series – OU 220. Early action on the ‘under’ has pulled that line down to OU 218 though as we near the start of this contest. 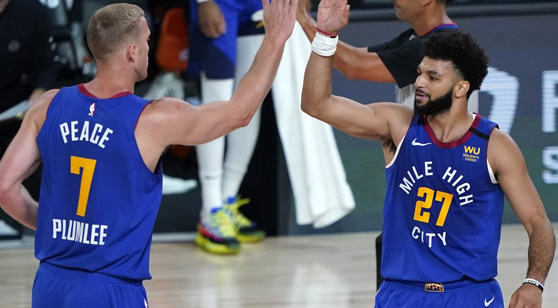 Denver PG Jamal Murray scored 50 points in Sunday's Game 6 as the Nuggets avoided elimination once again to the Jazz. (AP)

Donovan Mitchell continued his dominant playoff campaign on Sunday night, tallying his third game with 44+ points in this Western Conference opening round series, but it wasn’t enough to get the job done for the second consecutive game, as Utah dropped the contest 119-107.

The Jazz appeared to have Denver on the ropes heading into Game 6 with a 3-1 lead (two of their three victories by 19+ points), but Murray just simply isn’t ready to go home yet, as he has scored 142 points in the Nuggets last three contests (Game 6 – 50 points).

Some people are suggesting that we just pull everybody else off the court for Game 7 and just let Mitchell and Murray play a 48-minute one-on-one game to determine who advances to the second round of the Western Conference Playoffs.

Very unrealistic – but it sure would be fun to watch. Tuesday night on ABC is “must-watch” television as we will get the privilege of seeing an action-packed duel between emerging superstars in a primetime do-or-die game.

Utah couldn't miss a shot in the first quarter yet it only managed to hold a six-point lead. As the Jazz offense cooled off from distance, Denver kept connecting and that was the difference on the hardwood and at the betting counter in Game 6.

Nuggets vs. Jazz
How to Handicap Game 7

“Success being overshadowed” has been the theme of Spida-Mitchell’s career so far, hasn’t it? Having a great rookie campaign, only to be beaten out by Ben Simmons for ROY. Playing well in last year’s playoffs, only to get bounced by James Harden and the Rockets in five games.

Now, Mitchell is averaging over 38 points per game in a playoff series with the Nuggets, might not even advance from the series, AND isn’t even the most talked-about player heading into the Game 7 matchup. It may have not appeared that way over the last three games, but Mitchell really is the best player on the floor in this series and I expect him to show up BIG in the final tilt of this series.

Look for him to easily go over whatever “total points” line he is given in this win-or-go-home Game 7 matchup on Tuesday night.

Put another tally up on the board, as the Nuggets' Game 6 victory marks the 12th ‘over’ in Denver’s last 13 contests. At first, the point totals piling up could be attributed to the Nuggets' injury issues and defensive struggles, but now their contests are beginning to soar ‘over’ for different reasons, and it starts with the increase in usage of Murray.

Denver typically likes to slow down the pace of the game and play through its All-Star center, Nikola Jokic, but when a guy scoring at the rate Jamal has in his last three games, you abandon the original game plan and feed him the rock; which is what we are seeing from Malone and his staff.

The Nuggets were glad to get Gary Harris back from injury in Game 6 with hopes to take some of the scoring load at the guard position off Murray’s shoulders for the remainder of the series, but obviously that did not happen and will not happen in the foreseeable future.

Game 7 of this series has the potential to be one of the most memorable duels to take place inside the Orlando bubble as two of the hottest guards in the NBA square off in a winner-take-all game in the opening round of the Western Conference Playoffs.

Regardless of what we have seen from Murray in the last two games, I still believe Mitchell is the better player and will be the superior of the two superstars on Tuesday night, leading his team to a series victory. Give me the Jazz -1 here, as I don’t believe the betting public fully understands how difficult it is to knock off a team this good three times in a row.