The Heat improved to 5-0 in the NBA Bubble on Monday as it defeated the top-seeded Bucks in Game 1 of their Eastern Conference semifinal matchup.

Milwaukee has been solid when playoff off a loss and the oddsmakers have the club favored when they take the court in Game 2 on Wednesday. 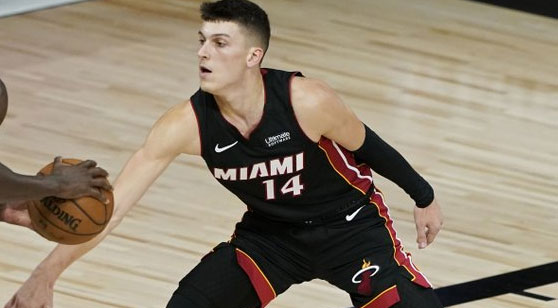 The Heat rallied past the Bucks in Game 1 as Miami is once again an underdog on Wednesday. (AP)

What was once a six and a half-point spread in favor of Milwaukee going into Game 1, has been trimmed down by over a third as Giannis Antetokounmpo and the Bucks head into Game 2 as just four-point favorites, following their 115-104 loss to the Miami Heat in the series opener on Monday night.

‘Under’ bettors struck gold in Monday’s Game 1 tilt, as Milwaukee and Toronto combined for just 219 points – four and a half points under the total for the contest (OU 223.5). The oddsmakers decided to meet somewhere in the middle for the second game of this series, setting the line at OU 221.5 for Wednesday’s matchup.

Miami reigned victorious in Game 1, but it seems Vegas is content taking its chances against Jimmy Butler and company, listing the Heat as +175 underdogs heading into Wednesday’s contest.

The first game of this Eastern Conference Semi-Finals series was a track meet out of the gate, as Miami and Milwaukee combined for 69 points in the opening stanza of the matchup – 40 of those points belonging to the Bucks.

The Heat came charging back following the first quarter though and refused to take their foot off the gas for the remainder of the game, as Miami won the last three periods by a total of 22 points.

Most of that can be attributed to Monday night becoming the “Jimmy Buckets Show” down the stretch, as Butler tallied 27 second half-points to ultimately put the nail in Milwaukee’ coffin, 115-104.

Antetokounmpo appeared to be playing rather passive in Monday’s contest, attempting just 12 field goals in the opening tilt as his team spent virtually all of Game 1 trying to shoot its way back into striking distance from long-range, leaving the reigning-MVP with a rather under-whelming offensive role in the last three periods (8 FGA – Last 3 quarters).

Let’s see if Mike Budenholzer stresses playing through Giannis in Game 2, or if he elects to try to attack the Heat with the longball again like he did in Game 1.

After scoring 40 points in the first quarter, bettors backing the Bucks were looking good. Unfortunately for them, Milwaukee cooled off in the second-half and was held to 41 points in the final 24 minutes.

Similar to wagers on the Bucks, the 'over' for the game was a tough beat especially after seeing the pair combined for 69 and 123 in the first quarter and half respectively.

Heat vs. Bucks
How to Handicap Game 2

It was so much fun watching “Playoff Jimmy” light up the Bucks for 40 points on 65% shooting in Miami’s win in their series opener on Monday, but the Heat better stay on their toes heading into Game 2 as they can’t expect that kind of scoring explosion out of from Butler on a nightly basis.

Goran Dragic also continued his playoff tear on Monday night, going for 27 points in Game 1, combining with Butler for over 58% of Miami’s total points. When you play the Bucks, the game plan must be to keep the ball away from the DPOY, and Eric Spoelstra’s team executed it seamlessly.

Bam Adebayo should be the one neutralized for the majority of Game 2 yet again, as he will likely draw the Giannis matchup for the second straight contest. All Miami can do is hope its shooters stay hot going into Game 2 while giving that same defensive effort for the remainder of the series.

Antetokounmpo is not going to be crowned MVP in consecutive seasons simply because he has been the clear-cut best player in the league for the past two seasons.

It also must be attributed it to Giannis owning the highest usage rate in the NBA this past regular season (36.3), to go along with his superb basketball ability and physical attributes.

SO, GET HIM THE BALL. It is inexplicable for the Greek Freak to only account for just 12 of Milwaukee’s 75 field goal attempts over the course of a contest. On top of the Bucks failing to get their best player the ball, will somebody in a green jersey PLEASE make a free throw before Budenholzer has a literal cow on the sideline (14 for 26 – Game 1 FT’s).

Title-contenders do not shoot 53% from the foul line in playoff games. The Bucks are going to have to do many things better in Game 2 if they want to even this series up on Wednesday.

The only injury really worth keeping an eye on for Wednesday’s contest is Eric Bledsoe’s hamstring. Coach Budenholzer confirmed the Milwaukee point-guard practiced on Tuesday, but he wouldn’t give a clear answer regarding Bledsoe’s status for Game 2. If Bledsoe is unable to go, I like Middleton to go over 22 points on Wednesday.

If Butler plays the way he did in Game 1 for the rest of this series, there is no doubt that the Heat will be the team facing the winner of the Raptors and Celtics in the Eastern Conference Finals in a week or two from now.

But I’ve been watching Jimmy play long enough now to know that he is not going to put the Heat on his back like that offensively for the entirety of a seven-game series, which is probably what it is going to take to knock off a Giannis-led Milwaukee team.

Give me the Bucks -4 here as I think Miami will struggle to keep up with the top seed in the east without another 40-point explosion from Butler.