The Heat improved to 6-0 in the NBA Bubble on Wednesday as it defeated the top-seeded Bucks in Game 2 of their Eastern Conference semifinal matchup.

Milwaukee sits a 2-0 hole against Miami as the Bucks are favored once again in Game 3 looking to avoid a 3-0 series deficit. 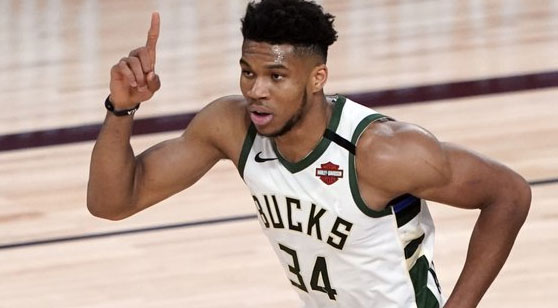 Giannis Antetkounmpo and the top-seeded Bucks trail the Heat, 2-0 in their best-of-seven series. (AP)

In spite of losing the first two games of this series, the Bucks are favored in Game 3. Milwaukee is listed as the "road" team in the bubble, but the Bucks are a favorite for the 19th time in the last playoff 23 games since 2019. The Bucks own an impressive 13-0-1 ATS record in their last 13 postseason wins, but the Heat are a perfect 6-0 SU/ATS in the playoffs so far.

The Heat reversed course from a slow start in Game 1 in which they trailed by 11 points after the first quarter to grab a nine-point advantage following the first 12 minutes in Game 2. Miami was in control for most of Game 2 before Milwaukee roared back in the final minute to tie the game.

The Bucks received a huge break on a foul call charged to Heat guard Goran Dragic on a three-point attempt from Milwaukee's Khris Middleton in the final seconds. Middleton drilled all three free throws to tie the game at 114-114, but the Heat lucked out on their next (and final) possession when Bucks' star Giannis Antetokounmpo fouled Miami's Jimmy Butler on a jump shot. Butler hit both free throws to give Miami the victory as the Heat cashed not only in the full game, but also in the first quarter and first half.

Heat vs. Bucks
How to Handicap Game 2

The Bucks shot the ball well in Game 1 from the floor (49% and 16-of-35 from three-point range), but missed the freebies when it mattered most by going 14-of-26 from the free throw line in an 11-point loss. Milwaukee started fast and faded in the second half by scoring only 41 points, but the Bucks outscored the Heat in the second half of a Game 2 by a 54-50 margin.

Milwaukee shot better from the foul line in Game 2 by going 33-of-40 from the charity stripe, but the Bucks were held to 7-of-25 shooting from three-point range with three of those triples coming from big man Brook Lopez. Antetokounmpo led the Bucks with 29 points, while Eric Bledsoe returned from injury to chip in 16 points, but the Bucks have now lost four of five meetings with the Heat this season.

After Butler torched the Bucks for 40 points in the series opener, the former Marquette standout scored only 13 points (two coming on the final free throws) in the Game 2 victory. The Heat were carried by six other players who scored in double-figures, led by Dragic's 23 points, as the guard was one of five Miami players to knock down at least three treys on Wednesday.

Miami is the only team to win and cover in each of its first six playoff games (Boston failed to cash in Game 4 against Philadelphia in the first round). The Heat won and cashed in their first bubble game against the Nuggets, but then posted a 2-5 ATS mark in their final seven seeding contests before this hot streak in the playoffs.

The last time the Heat won their first six games in a postseason came back in 2014, the last season of the "Big Three" era showcasing LeBron James, Dwyane Wade, and Chris Bosh. That was the only time during the "Big Three" reign from 2010-14 that Miami ever won six consecutive playoff games.

Iguodala sustained a right ankle sprain late in the third quarter of Game 2. The veteran swingman scored four points in 11 minutes on Wednesday and is listed as questionable for Game 3.

In two of the last three postseasons, the Bucks have lost three straight games, which both came against the Raptors in 2017 and 2019. Milwaukee could have saved the series if it wasn't for the foul on Antetokounmpo in the final seconds of Game 2 and the Bucks could have somehow won in overtime. The momentum is clearly on Miami's side right now and it seems like the wheels have fallen off the wagon for Milwaukee with the lack of home-court advantage to go along with the boycott last week weighing them down.