The second round of the NBA Playoffs in the Western Conference will continue Saturday as the No. 3 Denver Nuggets will look to bounce back in Game 2 against the No. 2 Los Angeles Clippers. 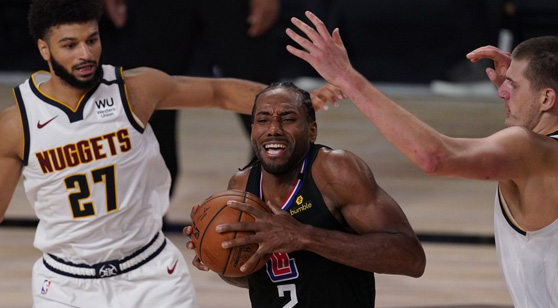 The L.A. Clippers connected on 57 percent of their shots in Game 1 en route to an easy double-digit victory over the Nuggets. (AP)

Despite seeing the Clippers absolutely drop the hammer on Denver in Game 1, the oddsmakers have decided to stick to their guns on the spread for this Game 2 bout, rolling out the line of Los Angeles -9 for the second straight contest.

‘Over’ bettors were sitting pretty following the first quarter of Game 1, as the Nuggets and Clippers ran up a tally of 62 points in the first stanza of the contest, but Denver scored just 36 points in the 2nd and 3rd periods combined, causing the first playoff matchup between these teams to fall under the total (OU 223).

In the Clippers’ first playoff series with the Mavericks, they traded off victories with Luka Doncic and company for the first four contests of the series (split 2-2), before inevitably running away with the last two games of the bout once Porzingis left the bubble with an injury.

The Nuggets can cash as +320 underdogs to trade-off victories with Clippers in Game 2 on Saturday night.

It looked like the Nuggets might have had something up their sleeve for the Clippers this whole time when Jerami Grant came out in the first quarter of Game 1 burying his first three shots from downtown and led his team to a 31-31 tie heading into the second period.

That was short-lived though, as Mike Malone’s team was outscored by Kawhi Leonard and company 89-66 for the remaining three stanzas.

Paul George’s playoff struggles continued on Thursday night as he went 2 for 7 from 3-point land and recorded the lowest FG% out of the LAC starters (46%), but his services weren’t necessarily needed anyway with the Claw going for a very casual 29 points on 75% shooting in the Clippers’ 120-97 victory.

A lot needs to change heading into Game 2 for the team from the mile-high city. Let’s see if the Nuggets can actually put together four quality quarters of basketball on Saturday night, like the first stanza of their Game 1 loss.

As mentioned above, the opening matchup saw both teams come out blazing and the pair were tied at 31-31 after the first quarter before the Clippers surged ahead with a 38-20 second quarter.

Denver's woeful shooting continued in the third quarter, finishing with just 16 points. The pair did combined for 59 in the fourth quarter but the struggles in the third cost 'over' bettors from cashing all of their wagers.

Nuggets vs. Clippers
How to Handicap Game 2

The Nuggets needed every bucket of Jamal Murray’s 40+ points per game in Games 4-7 of their opening round series to put away the sixth-seeded Jazz, and 12 points on 33% shooting just simply isn’t going to cut it against an even tougher opponent.

I’m not blaming the Denver loss on Murray not going off for 40 points, but it was still tough for the Nuggets to keep up with the offensive firepower of Donovan Mitchell last round, even with Jamal scoring at that rate he scored at. It is pretty simple for the Nuggets at this point.

Let Jokic and Murray try to heat up, because they are going to need something similar to Jamal’s explosions in the first round to get themselves back in this one.

I am personally not picking a side between the Nuggets and Clippers on Saturday night, but not because I have lost faith in Doc Rivers’ team or am worried about them whatsoever – just because they tend to take their foot off the gas defensively a little bit when times are comfortable; and I think there is a good chance Saturday could be one of those times.

It also doesn’t feel safe to back the Clippers at this large of a spread when PG13 is shooting with the lack of efficiency he has shot with lately.

Not going to fade the Clippers in Game 2. Just not going to back them to cover in as second straight contest either.

As if the Clippers didn’t already have the upper-hand heading into this series, they got point-guard, Pat Beverley, back from injury in Game 1 and it seemed to send them over the edge offensively early, as Los Angeles put up 69 first half points.

Aside from Cancar and Barton, who have missed the majority of these playoffs, Denver and Los Angles both head into Game 2 of the Western Conference Semi’s boasting relatively clean slates on the injury report.

I definitely can’t back the Nuggets on Saturday night after seeing their sorry performance on offense in Game 1, but I don’t feel particularly safe siding with the Clippers to cover in their second straight game of this series either.

I think we are going to see Los Angeles take its foot off the gas on defense a little bit in this game, like we saw them do against the Mavericks when they dropped the second contest of that series 127-114.

Give me ‘over’ 221.5 here as I think the Clippers win this game too, but won’t pay nearly as much attention to detail on the defensive side of the ball.