Game 2 of the Western Conference semifinals between the No. 1 L.A. Lakers and No. 4 Houston Rockets will take place on Sunday night from the NBA Bubble in Orlando, Florida.

Despite being a heavy underdog in Game 1 and the series, the Rockets took the opener with their small-ball approach as the Lakers couldn't keep up with them offensively. 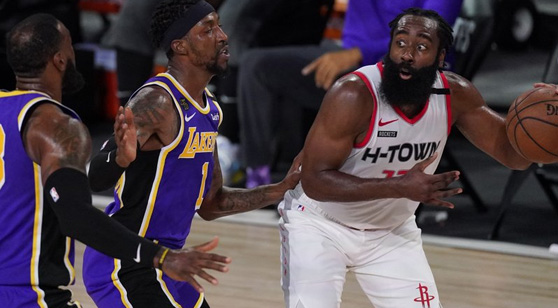 Despite dominating Game 1, the oddsmakers still have the Rockets listed as healthy underdogs to the Lakers in Game 2. (AP)

Showing a little less confidence in LeBron’s crew heading into Game 2, but Vegas still backing them as the Lakers enter their second Western Conference Semi-Final matchup as five and a half-point favorites, despite being outclassed on both sides of the ball in the first matchup of this series on Friday.

‘Under’ bettors never broke a sweat on Friday night thanks to the Lakers, as Frank Vogel’s team put up just 97 points in Game 1. The ‘over-under’ for the second game of this series has fallen to OU 224 points.

Rockets straight-up bettors walked away from Game 1 with fat pockets as Houston entered the contest as +240 on the money line. That price has gotten more expensive for Game 2, but still sits at a juicy line of +201.

James Harden carried the energy he brought down the stretch of Game 7 against the Thunder into the Rockets’ opening contest with the Lakers, and he rode it all the way to the finish line in Game 1, tallying 36 points on 60% FGA and 9 of 12 from downtown in Houston’s 112-97 rout of LAL.

The Rockets did not necessarily have a great game from deep, as they knocked down just 14 of their 39 3-point attempts, but they shot it much better than Lakers, who shot just 29% from 3-point land.

The opening matchup in this series was a wire-to-wire result as Houston led after the first quarter and it never looked back.

Total bettors on the 'over' were teased with a good start as the pair combined for 120 points at halftime but neither club could break 50 in the second-half and that led to an 'under' winner.

Rockets vs. Lakers
How to Handicap Game 2

Before Friday’s Game 1 matchup, it had been the Russell Westbrook show when the Lakers and Rockets met up in 2020, as the former-MVP averaged over 38 points per game, bobbing and weaving through the LA defense in the two contests he participated in against LeBron and company this season.

The first playoff game between these teams was a different story though, as Chef Harden had the hot hand, going 12 of 20 from the field and 50% from downtown. Mike D’Antoni’s team didn’t win Game 1 by knocking down 25 3-pointers in a fluke.

They won by standing toe-to-toe with the top-seed in the Western Conference and playing quality defense against a superior team for four whole quarters. All Houston can do is keep bombing away and pray to the basketball gods that the Lakers don’t find their rhythm from deep.

If the Rockets go 20 of 35 from downtown and just run a team out of the building like they are capable of doing sometimes, there is nothing you can do except tip your cap to them, but that is far from what happened to the Lakers on Friday night.

There is really no excuse for the LA not breaking 100 points in this matchup, when Anthony Davis stands three inches taller than any of Houston’s starters while debatably being the best big man in the NBA. He scored 25 points on 62.5% shooting in Game 1 and it is clear Houston has nobody on the court that can potentially guard him.

The game plan has to be simple for Los Angeles moving forward. Don’t panic. Control the pace of Game 2. Get the ball to AD and the Lakers should not have a problem advancing to the next round, because they really are the far superior team in this series.

The defense has been there all month, they just need to start scoring more points, which everyone knows LAL is very capable of doing.

Rockets’ forward, Danuel House Jr. left in the third quarter of Houston’s Game 1 victory over the Lakers and did not return for “precautionary” reasons. He is listed as a game-time-decision for Sunday’s contest.

The ‘under’ cashed in the first game of this series and I think there is a good chance we see a trend form with a similar total in Game 2.

The Lakers have been miserable on offense so far in the bubble, with the exception of the games in the Blazers’ series Lillard didn’t play in. I have faith in LeBron and the Lakers bouncing back in Game 2, but five and a half points feels like a lot of points after how they shot in Game 1.

Give me the ‘under’ here, as I think LAL comes out on top on Sunday night by playing outstanding defense and keeping this contest under 224 points for a second straight game.