The second round of the NBA Playoffs in the Western Conference will continue Wednesday as the No. 3 Denver Nuggets will look to bounce back in Game 4 against the second-seeded Los Angeles Clippers. 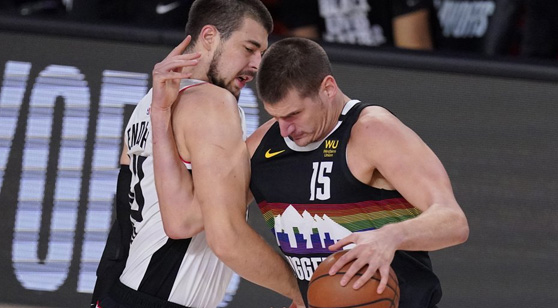 Big man Nikola Jokic led the Nuggets with 32 points in Game 3 but Denver still came up on the losing end to Los Angeles. (AP)

The Nuggets and Clippers will meet up for the fourth time in this series on Tuesday night and it appears Denver is slowly beginning to gain the respect of the oddsmakers, as Vegas shifted the spread for Game 4 to Los Angeles -8, with early action favoring the Clips.

After cashing ‘over’ tickets in Game 1, thanks to a 132 point scoring outburst from LAC, the ‘under’ has hit in consecutive games between these teams, which has brought the ‘over-under’ for Game 4 down to OU 220.5, after seeing the total climb up to nearly OU 225 for the series opener.

Denver is no stranger to overcoming steep series deficits as Mike Malone was able to rally his team back from a 3-1 disadvantage against the Utah Jazz in the opening round of the playoffs in the bubble. Vegas has the Nuggets currently listed as +700 underdogs to advance to the Western Conference Finals now that they trail the second-seeded Clippers by a game.

The Clippers took a 2-1 SU series lead with their 113-107 victory over Denver on Monday night but failed to cover the 9-point spread set by most books, making LAC 1-2 ATS in this series as Denver bettors were rewarded with the easy backdoor cover down the stretch of Game 3.

Paul George appeared to have finally snapped out of his playoff slump in the third matchup in this series as he paced the Clippers in scoring with 32 points on 66.7% shooting and 5 of 7 from downtown.

The scoring menace that was once Jamal Murray (14 points) in the Jazz-Nuggets series has seemingly vanished, but the good news is for Denver is that Nikola Jokic seems to be finding his rhythm now in this series after matching PG13’s total with a series-high 32 points, 12 rebounds, and 8 assists of his own in his team’s second loss of the matchup.

Game 3 was a back-and-forth affair with many lead changes throughout the game, as each team won two periods of the contest, respectively. Los Angeles just happened to win the fourth quarter of Monday’s game-high margin of 10 points, which was ultimately the determining factor for the game.

The one constant in this series has been the 'under' and the low side improved to 3-0 in Game 3 and it was a sweatshop as it managed to connect by a half-point at most sportsbooks.

Denver's inability to score in the fourth quarter (19 points) not only helped the 'under' cash but it also led to the straight up loss. The Nuggets did manage to hold on for the cover as underdogs despite getting outscored by 10 points in the final 12 minutes.

Nuggets vs. Clippers
How to Handicap Game 4

It was good to see Kawhi Leonard get a little bit of a rest and play second-fiddle to PG13 for once in these playoffs during Game 3, as the Claw has shouldered the scoring load for the Clippers for the bulk of the post-season so far, thanks to George’s shooting struggles.

Los Angeles did not have a spectacular game shooting the basketball on Monday night (11 of 31 3FGA), led by a 1 for 6 effort from deep by Leonard, but still found itself in the driver’s seat for the majority of the second half in Game 3.

If George’s struggles come back in Game 4, that puts a lot of pressure on Kawhi and the rest of Doc River’s team to step up and fill his scoring void.

It will be interesting to see if PG13’s success in Game 3 was just a flash in the pan, or if “Playoff P” is really back in LA.

Well, the good news for the Nuggets is that it looks like the Joker is back after being just two assists shy of a 32-point triple-double in Denver’s 113-107 loss on Monday night.

The bad news is, Murray looks like he has totally lost the explosive scoring magic that he possessed for that three-game stretch during the Utah series, as he has gone 8 for 26 from downtown in his current series with the Clippers, averaging just over 17 points per game.

The only game Denver has been able to win so far in this series with LAC, has been the contest in which Jokic AND Murray both went for 25+ points (Game 2).

Mike Malone is going to need similar production from his two stars in Game 4 if they want a chance to even up this series with the second seed in the Western Conference on Wednesday night.

The only players listed on the injury report for Wednesday’s contest are Vlatko Cancar and Will Barton, who were already sitting out for Denver prior to the Western Conference semifinals.

No reports of any additional injuries have arisen out of either camp following the Clippers’ victory on Monday, as all hands are on deck for this crucial Game 4 matchup inside the Orlando bubble.

Denver needed every single bit of Murray’s 40+ points per game in the final four contests of the Nuggets’ opening playoff series to knock off the sixth-seeded Jazz in seven games.

Now they find themselves in a battle with a team that has a “championship or bust” mindset in the Clippers who are mainly just trying to iron out kinks before their future-Western Conference Finals matchup with the winner of the Rockets-Lakers series.

Give me the Clippers -8 here, as I think Kawhi and company crush whatever championship hopes the Nuggets still have with a statement win on Wednesday, with PG13 and Kawhi BOTH being on their A-Game for the first time in the playoffs.