The second round of the NBA Playoffs in the Western Conference will continue Thursday as the No. 4 Houston Rockets look to bounce back in Game 4 against the top-seeded Los Angeles Lakers. 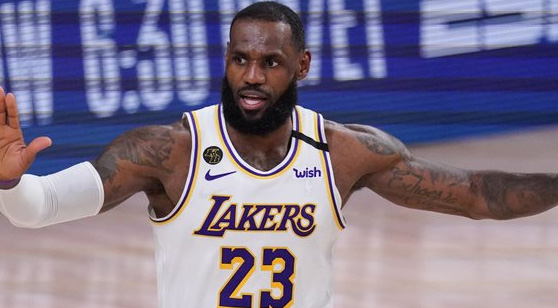 LeBron James scored 36 points in Game 3 and the L.A. Lakers used that effort to take a 2-1 series lead over the Houston Rockets. (AP)

After winning and covering in back-to-back contests to take a 2-1 series lead, Vegas has the Los Angeles Lakers listed as five-point favorites heading into Game 4 of this seven-game series as Frank Vogel’s crew will look to earn a commanding two-game advantage over the Rockets on Thursday night.

Despite cashing ‘over’ tickets in the second game of this series (117-109 – LAL), the ‘over-under’ for this matchup has been on a steady decline since it opened at OU 227 for Game 1. The line for Thursday night’s matchup sits at the lowest total between these units all season – OU 220.

Prior to Game 2, we saw the price for Houston’s potential advancement to the Western Conference Finals climb all the way up to +180 back when the Rockets owned a 1-0 lead. That mark has fallen significantly heading into Game 4 though, as Mike D’Antoni’s team is now a +525 underdog to knock off the top-seeded Lakers, trailing now 2-1.

Another high-quality basketball game took place between the Rockets and Lakers in the bubble on Tuesday night, as the first and fourth seeds in the Western Conference entered the final quarter of Game 3 deadlocked on the scoreboard and in the series. LeBron James finished with another jaw-dropping stat line of 36 points, 7 rebounds, and 5 assists in Tuesday’s contest as he became the NBA’s all-time playoff wins leader (161) – but anyone who actually watched the game will confirm that Rajon Rondo was the MVP for the Lakers in the contest.

Anthony Davis and James were rather loud in the opening two stanzas of Game 3 as the superstar-duo combined for 44 points, 9 rebounds, and 6 assists in the first half on Tuesday – but the closing minutes of the contest belonged to “Playoff Rondo” as he tallied 12 points, 5 assists, and played tremendous defense down the stretch to help secure the victory and a 2-1 lead for Los Angeles.

It was déjà vu for bettors backing the Rockets in Game 3 as the club ran out of gas in the fourth quarter. Los Angeles outscored Houston by exactly 10 points (30-20) in the final 12 minutes for the second consecutive game.

Houston was outscored 51-38 in the second-half and the offensive struggles helped 'under' bettors connect even though the 'over' appeared to be the right side in this contest.

Lakers vs. Rockets
How to Handicap Game 4

It was great to see LeBron and AD finally get some help scoring the ball on Tuesday night as Kuzma and Rondo combined for 35 points off the bench in the Lakers’ crucial Game 3 victory – 20 of those points coming in the fourth quarter.

In LAL’s 112-97 loss to Houston in Game 1, Alex Caruso appeared to be the only Laker role-player with a pulse as he led his team’s non-superstars in scoring with 14 points on 57% shooting. On Tuesday, LeBron kept his team in contention during Houston’s scoring outbreaks, going for 29 points in the first half, but then we saw him turn the ball over to the hot-hands coming off the bench down the stretch as he coasted to the finish line with just five points in the fourth quarter.

The Lakers are easily the best team in the NBA when all the pieces come together for them like they did on Tuesday night. It is crucial for LAL to get serviceable play out of its role-players (especially its guards) for the remainder of this series, because we have seen what the Rockets are capable of when teams get lazy defensively against them.

I am not sure who I should be mad at in the Rockets organization for this, but regardless, the Rockets’ approach on offense in this series is driving me crazy and something clearly needs to change. There is no way Houston traded away Clint Capela to the Hawks so a 25% 3-point shooter in Russell Westbrook can jack up an increased volume of longballs per game. The ex-Thunder point-guard has outshot Harden 63-55 over the course of this series and that cannot continue to happen if Houston wants to remain competitive.

What the Rockets have done with this team should inspire front offices with inferior talent-levels to engineer unique offensive schemes and ride with them, but the way Houston is currently executing its strategy is atypical for them in a playoff sense. Westbrook averaged over 38 points per game against LAL in the regular season, but the Rockets know now they are dealing with an evolutionarily advanced version of the unit as the post-season intensity continues to ramp up.

James Harden NEEDS to shoot the ball more in Game 4 for Houston – whether he is feeling it or not (4 for 9 – G3). If Westbrook continues to take more shots than Harden for the remainder of this series, you can go ahead and chalk this series up to a victory for the Lakers because that is basically Houston waving the white flag on the season.

Tyson Chandler and Danuel House Jr. both elected to sit out during Houston’s Game 3 loss to the Lakers on Tuesday for “personal reasons,” and House Jr. is listed as questionable again for Thursday night’s matchup with the same tag. House Jr. suffered a minor face injury in the opening game of this series, but has returned to the Rockets lineup since then, leading me to believe the forward’s status is unrelated to concussion protocol etc.

If any players listed on the injury report miss Thursday night’s contest, it should not have a large impact on the final outcome of the game – likely a slight uptick in volume for Harden and Westbrook.

The ‘over-under’ for Thursday’s contest has fallen down to OU 220 points, which is the exact total scored by these teams in Game 3 and the lowest total set by the oddsmakers for a matchup between Houston and LAL this year.

Give me ‘over 220’ here as I think there is a good chance LA takes its foot off the gas a bit on defense in Game 4, giving the Rockets a plethora of opportunities to steal a win down the stretch on Thursday night – But they will likely need 115+ to do it, given how efficient the Laker offense has been since Game 2.