For those uninterested in Sunday Night Football this week or plan on double-fisting some NBA action to finish off the weekend.

VI has you covered with full game previews and best bets for Sunday’s basketball slate, starting with the Celtics-Pacers game which is set to be one of the top matchups of the evening.

The Pacers opened this game as a three-point home favorite at Circa Sports on Saturday, which means that after reaching last year’s Eastern Conference Finals, Boston has now opened as an ‘underdog’ in three consecutive contests to start the season.

But we are seeing this number swing quickly towards the Celtics direction as we approach tipoff and as of late Saturday, the Celtics are short favorites at all betting shops.

The Celtics pulled off the upset in the over the Bucks on opening night in the Boston Garden (122-121) but were absolutely manhandled by Kyrie Irving (37 points, 8 assists, 6 rebounds) and the Nets on Christmas Day (123-95).

Indiana was also victorious in its season opener over the New York Knicks (121-107), catapulted by a dominant night from their big man, Domantas Sabonis (32 points, 13 rebounds, 5 assists).

On Saturday, the Pacers improved to 2-0 as they ran past the Bulls 125-106 as road favorites (-6.5). The offense is averaging 123 points per game so far this season and that's helped the 'over' connect in each contest.

Indiana and Boston met up twice during last year’s regular season and the teams managed to split the season series (1-1).

The biggest difference between the two games was Pacers’ guard, Malcom Brogdon (29 points, 8 assists, 2 rebounds), participated in the first matchup between these teams and led Indiana to a narrow victory against its Eastern Conference foe (122-117).

While in the second contest, Jayson Tatum erupted during the UVA-product’s absence, going off for 30 points, 6 rebounds, and 2 assists on 50% shooting in the Boston victory (114-111) 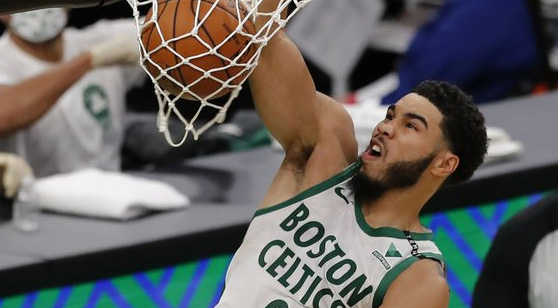 The Celtics will be looking to get back on track tonight when they play the Pacers in the first of two straight games on Sunday. (AP)

The public seems to be a little down on the Celtics currently after seeing them sneak out a win on opening night via a missed free throw from Giannis Antetokounmpo in a one-point game with time expiring, and then following that up by receiving a beating from the Brooklyn Nets on Christmas Day for the whole world to see.

I believe the loss to the Nets on Christmas was more about Brooklyn being much better than most people realize, rather than the Celtics not looking good out of the gate to start the year.

The Pacers will be Boston’s easiest matchup of the season thus far and I expect Brad Stevens and company to win this contest.

One thing to consider about the Pacers right now, is they are about as healthy as we have ever seen this team with Oladipo, Brogdon, and Turner all finally reaching full-strength.

Indiana looked good in its first game, but the defense is a concern considering they allowed the Knicks to shoot at over 45% from the field and 43% from deep.

If I were to pick a side of the over-under to be on, I would side with the over after seeing Indiana’s lack of urgency on defense against New York.

In his lone contest against the Celtics last year, Brogdon propelled the Pacers to a narrow victory (122-117) by racking up 29 points, 8 assists, and 2 rebounds on 67% shooting from the field.

In his first game of the 2020 season, he cruised to 21 points, 8 assists, and 7 rebounds across 34 minutes while Indiana captured its first victory of the year. Back him to accumulate over 30 total stats again tonight as he tries to keep up with a fellow ACC-product in Tatum on Sunday night.

Boston finally gets out of the spotlight against the Pacers after being on national television against elite opponents in each of its first two contests to start the season (Milwaukee, Brooklyn).

After two tough matchups to start the year, squaring off with Indiana should feel like a breath of fresh air to the Celtics and I expect them to handle business in Indiana on Sunday night after getting a wakeup call from Brooklyn on Christmas Day.