Nationally televised Monday Night NBA action is back and VI has you covered with all of the best bets and game previews for your betting needs, and we will finish things off for the day by taking a look at the 10 P.M. ET matchup between the Lakers-Blazers on NBATV.

The Lakers come into tonight’s contest as a 3-point favorite over the Blazers, which is the smallest pregame spread-margin since they played the Clippers in their first game, but still marks the 4th consecutive regular season contest that the defending champs have been listed as a favorite. 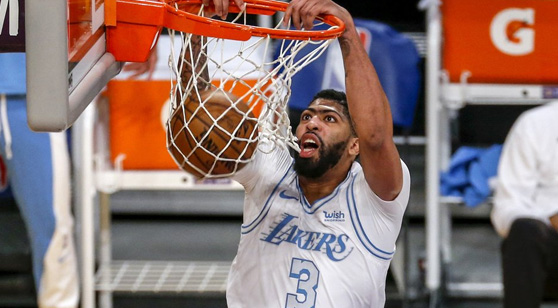 Anthony Davis and the Lakers will close out their four-game homestand against the Trail Blazers on Monday. (AP)

After being stomped by the Jazz in their season opener, 120-100 and a miserable outing from Damian Lillard (9 points, 1-7 3PA), the Blazers surprisingly showed an encouraging amount of fight against the Rockets on Sunday night as they edged Houston in overtime, 128-126 despite a 44-point, 17-assist performance from James Harden.

Anthony Davis sat out during last night’s Lakers’ 127-91 blowout win over the Timberwolves with a minor calf contusion, which goes to show that the Lakers’ recently added depth may make them even more of a monster than people realize with their offense appearing to not miss a beat with Marc Gasol starting in his place.

Obviously, the most recent matchup between these teams occurred during the first round of last year’s playoffs in the NBA Bubble, when the Blazers courageously stole a win in the first game of the series from LeBron James and the Lakers, only to get beat like a drum in four consecutive contests and a take a quick exit from the NBA Playoffs.

The Blazers gave the Rockets everything they could handle last night as McCollum and Lillard combined for 76 points, 17 assists, and 8 rebounds during Portland’s inspiring victory, and now they will be forced to turn things around and take on an even more difficult opponent than their previous one on Monday night.

Portland put on an absolute show against Houston and they still needed every second of overtime to pull off the victory over a quality team. The Blazers are undeniably better when Jusuf Nurkic the healthy, but I fear they exhausted all of the energy in the tank for the weekend against the Rockets yesterday and have nothing left for the Lakers tonight.