Western Conference action resumes Sunday night on NBATV with the Portland Trail Blazers and the Golden State Warriors matching up for the back half of a 2-game weekend series at Chase Center in San Francisco.

VI has you covered with another slate of “Best Bets” and “Game Previews” to help you handicap Sunday’s NBA board.

Despite blowing out the Warriors in the exact same empty gym just a couple nights ago, 123-98, the Blazers head into Sunday’s contest as just a 5-point road favorite over Golden State. 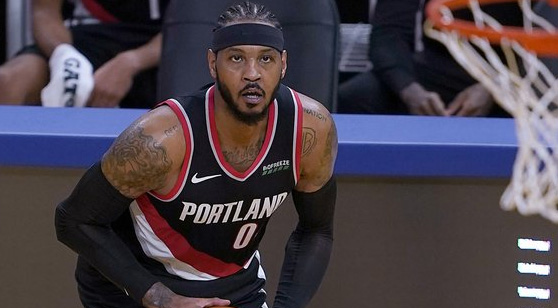 Carmelo Anthony and the Trail Blazers have started the season with a 2-1 record both SU and ATS on the road. (AP)

Bettors didn’t need a functioning crystal ball to roughly predict the outcomes of the Warriors first four games to kick off the 2020-2021 season (Nets – L, Bucks – L, Bulls – W, Pistons – W), but Friday night’s matchup against Portland was a bet that there appeared to be some controversy about heading into the contest.

I believe Portland has just about put an end to that controversy though, considering they appear to be much more representative of the squad that reached the Conference Finals just two seasons ago, than the injury depleted team we saw struggling to reach the playoffs in last year’s NBA bubble.

The most recent matchup between these teams occurred just a few nights ago, which resulted in Golden State’s third loss by 20+ points this season in just five games. Damian Lillard and C.J. McCollum were both magnificent in the contest, combining for 62 points on over 47% from 3-point territory (10-21).

Stephen Curry received a little bit of help from his supporting cast in the contest, with Eric Paschall and Andrew Wiggins shooting for a combined 10-19 from the field and tacking on 28 additional points. It was still not nearly enough to keep up with Portland though, who ran away with this game early by scoring 103 points before the start of the fourth quarter and was able to empty its bench down the stretch of the contest while still maintaining a 20-point lead.

The Blazers are in the midst of their easiest task of the season thus far as they will look to complete a weekend sweep of the Warriors on Sunday night, after matching up with the Jazz, Rockets, Lakers, and Clippers in their first four contests.

Golden State is nowhere near the caliber of the teams Portland has already dueled it out with prior to this weekend, and I expect that to show through with another big performance from the Blazers in the final game of this weekend set.

Klay Thompson’s season-ending injury is absolutely devastating as an NBA fan, because I was extremely intrigued by the idea of the “Splash Brothers” back in action together without Kevin Durant present in the lineup, but obviously my wishes will have to at least wait one more season as we all wish Klay a speedy recovery.

Steph is still an All-Pro caliber guard but him, alone just simply isn’t enough to shoulder the weight of a team this shallow for the entirety of a season. The Warriors are undeniably fun to watch and have the firepower to upset any team in the league on a nightly basis.

However, betting against Golden State when they match up with playoff teams should be a profitable betting trend this year, because I believe they are going to have an extremely tough time reaching the post-season with their current construction.

The Trail Blazers have a crowded injury report, but the three most important players on their roster were left off the list entirely heading into Sunday night’s contest (Lillard, McCollum, Nurkic). Even if Gary Trent Jr. and Rodney Hood are both unable to suit up for this contest, I do not believe there is any reason to be worried about how Portland is going to to match up against this very shallow Warriors roster.

Curry scored 26 points, 8 rebounds, and 5 assists on 9-20 from the field in the Warriors’ loss to the Blazers on Friday night, but it still was not nearly enough to keep Golden State within in reach for the length of the contest.

I expect Steph to take it upon himself to make Sunday night’s matchup a closely contested game and to score 30+ points for the third time in just six contests on the year.

While I expect Sunday’s Blazers-Warriors game to be much closer than the one we saw on Friday night, I still believe Portland is still the far superior team in this duo, and five points against the spread is not quite enough to steer me away from betting on Lillard and company for a second consecutive matchup in less than 48 hours.