Primetime NBA action returns to TNT on Thursday night and we are being treated with another premier matchup between Eastern Conference contenders as the Philadelphia 76ers are set to take on the Brooklyn Nets.

VI has you covered with another slate of Best Bets and Game Previews to help handicap all the action.

The Sixers come into Thursday’s contest as a short road favorite, now marking the third time Brooklyn has been listed as an ‘underdog’ since the acquisition of Kevin Durant this past offseason. 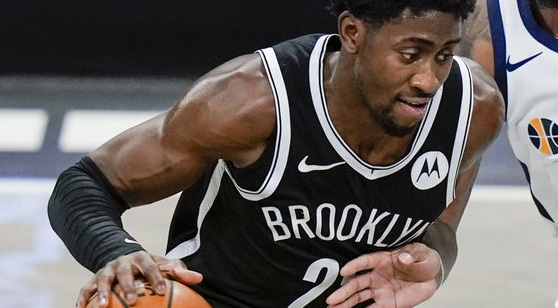 Caris LeVert and the Nets have found their offensive groove again and that's led to a 3-1 'over' run. (AP)

The Sixers come into this game riding a five-game winning streak and a victory over the Wizards in their most recent affair, led by Joel Embiid who compiled 38 points, 8 rebounds, and 3 assists on 55% FG and 75% 3FG.

Make a note that Philadelphia's lone loss this season came on zero days rest, when it dropped a 118-94 decision to Cleveland as a six-point road favorite.

Brooklyn comes into this game as losers in two of its last three and three of its last five but was finally able to get back on track against the Utah Jazz on Tuesday night.

The Nets are a newly constructed team, so the blunders they are experiencing early on this season are expected as they continue to sprout into the championship contenders everyone anticipates them to be.

The Sixers won three of four matchups with the Nets last season, but everything regarding the history of these two teams should be taken with a grain of salt, considering only one of those wins came against Kyrie in uniform.

In the one game that Brooklyn managed to win against Philadelphia last season, it was actually Spencer Dinwiddie leading the way for the Nets, racking up 24 points and 6 assists in the victory.

Unfortunately for Brooklyn though, the Nets will also be without him in this contest as he recently suffered a season-ending ACL injury.

Philadelphia currently owns the best record in the NBA (7-1), but will hopefully get their first real taste of adversity in this matchup against the Nets, as their schedule prior to this game has consisted of Washington twice, Charlotte, Cleveland, Orlando, New York, and the struggling Raptors.

Part of the Sixers’ success can be attributed to the hiring of their new head coach, Doc Rivers, along with Philadelphia’s front office being able to surround its superstars with adequate shooters to space the floor and enable Simmons to effectively conduct the offense while lacking a jump shot.

But much of Philadelphia’s success can also be attributed to the fact that their schedule has been the flimsiest in the NBA thus far and I expect Brooklyn to really test them on Tuesday night, even during KD’s absence.

The Nets played their second game of the season without Durant and this time things turned out slightly different, as Brooklyn absolutely pummeled the Jazz behind a 29-point performance from Kyrie Irving (130-96).

In Brooklyn’s first contest this season without Durant, Irving also did not suit up which led to a 4-point Nets’ loss to the Memphis Grizzlies in a game Ja Morant managed to tally only seven points in.

The Nets looked solid in their first outing solely missing KD, but Tuesday they will receive a much more difficult task against a Philadelphia team that’s size is notorious for giving fully healthy teams troubles on the perimeter defensively.

Durant is being forced to quarantine for at least a 7-day period after contact tracing revealed that he recently had been exposed to a positive COVID-19 case, likely resulting in the superstar sitting out of Thursday night’s contest against the Sixers and Brooklyn’s ensuing games this weekend.

With Durant absent from the lineup, there is a 29.7% usage void to fill in Brooklyn’s offense and I expect most of that volume to shift over to 3-point attempts from Irving, Caris LeVert, and Harris.

Harris has scored over 12.5 points in four out of his last six contests, and five of those games contained KD accounting for over a quarter of Brooklyn’s offensive usage percentage.

In the Nets’ first game without Durant, Harris put up 10 points on 4 of 7 shooting across just 23 minutes in a 36-point victory over the Jazz. Back Harris to score at least 13 points against a Sixers team that just allowed Bradley Beal to go for 60 last night.

When breaking down the teams in the Eastern Conference into tiers, I actually believe Brooklyn deserves to be one level higher in the hierarchy than Philadelphia following the acquisition of Durant, but that is heavily contingent on KD participating in basketball games.

The Nets have been extremely inconsistent in the early stages of their new construction, which can be expected from any team that is trying to make newly acquired pieces blend together over the course of a season.

So, I am going to bank on getting more inconsistency out of Brooklyn on Thursday night after seeing the Nets blowout the Jazz without Durant in their most recent contest.