Interconference action will take center stage on Friday night with the Utah Jazz visiting the Milwaukee Bucks and VI has you covered with another slate of Best Bets and Game Previews to help handicap all the action.

Milwaukee comes into Friday’s game as a 5-point favorite over the Jazz, marking just the second contest that Utah has been listed as an ‘underdog’ since the start of the new season. The total for this game sits at OU 231.5 – the highest total for a Jazz game so far this year. 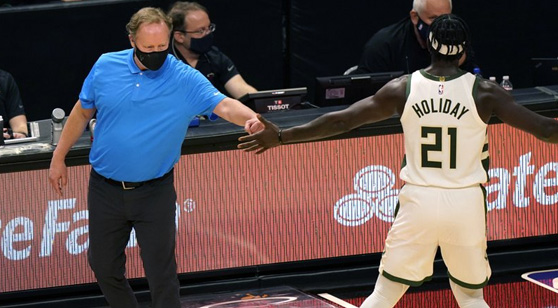 Head coach Mike Budenholzer and the Bucks have been a great bet at home this season, starting 4-0 SU and 3-1 ATS. (AP)

The Bucks alternated wins and losses for the first five games of the season, but since then have won three straight contests with two wins over the Pistons and one over the Bulls, bringing their SU record to 5-3 on the season.

Utah, on the other hand, is 4-4 on the year coming off back-to-back losses in the Big Apple to the Nets and Knicks. Each of Jazz’s last three games have been decided by 12 points or more, so it will be interesting to see how they fare in what is expected to be a closely contested game tonight.

My initial though was that this could potentially be a game that Giannis Antetokounmpo struggles in, considering he will likely have to deal with former Defensive Player of the Year, Rudy Gobert, in the paint for the majority of this contest.

Last year against the Jazz though, Antetokounmpo averaged 40 points, 12.5 rebounds, and 4 assists on 50.9% shooting across his two contests with the Jazz.

Donovan Mitchell is having a year to forget so far in his fourth NBA season, currently committed to launching up at least 20 shots per game for the Jazz while shooting the ball at a 37.9% clip.

Mitchell possesses the 8th highest offensive usage percentage in the NBA (31.3%), which will inevitably be extremely damaging to Utah’s playoff hopes if their superstar is unable to turn it around.

Since Mitchell’s rise to stardom in the NBA, Utah appears to have gotten away from the team-style of offense that originally made them dangerous. The Jazz seem content allowing Mitchell to play hero-ball for the length of important contests, even though he is almost single-handedly losing games for his team that they should not be losing.

The Bucks finished last year with the best record in the Eastern Conference at 56-17, so to say that this year’s start to the season has been a disappointment is undeniably an understatement, especially considering the pieces that had to be moved to acquire Jrue Holiday back in November.

Five wins at this point in the season is nothing to be ashamed of for most teams across the league, but when the reigning back-to-back MVP in the starting lineup with zero NBA Finals appearances and is now beginning to surround himself with All-Star caliber shooting, the Bucks are going to be held to a much higher standard.

A couple of guards highlighting the injury report for Friday night’s tilt between the Bucks and the Jazz with the chance that Joe Ingles and Pat Connaughton could both potentially miss some time for their respective squads.

The Bucks have had an odd 4-game stretch of blowout wins and losses over the last week or so, which has resulted in Middleton’s minutes and offensive usage percentage to take a hit recently.

But prior to that, Milwaukee participated in some relatively competitive matchups that resulted in Middleton shouldering a significant part of Milwaukee’s workload – tallying 22+ points in each of the Bucks’ first four contests.

He got back over 21.5 points in his most recent contest against the Pistons though, and I expect him to do it again on Friday night in what is expected to be a tight matchup with the Jazz.

The Bucks’ start to this season is extremely unimpressive compared to what we are typically accustomed to from them, tallying wins over the Pistons (2), Bulls, Warriors, and Heat with no Jimmy Butler – while dropping games to the Celtics, Heat, and Knicks.

Aside from the Celtics on opening night, Friday night’s matchup with Utah should serve as Milwaukee’s toughest game since the start of the new season, and Giannis and company just simply haven’t shown me enough to warrant backing them in this contest.