The Houston Rockets will get another chance to take down the Los Angeles Lakers at the Toyota Center on Tuesday night.

Houston was unsuccessful in its first attempt on Sunday, falling behind by 19 points at halftime against the defending champions. 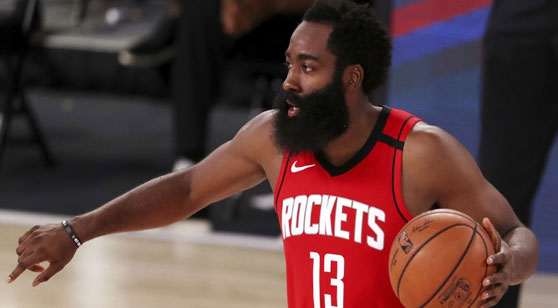 James Harden and the Rockets have lost five consecutive meetings with the Lakers. (AP)

Houston’s only wins this season have come against Sacramento and Orlando at home. The Rockets beat the Kings in consecutive home games in the span of three days about two weeks ago, and they hammered the Orlando Magic 132-90 last Friday.

They have not been as effective against other teams. Houston has yet to win a road game and lost to Dallas and the Los Angeles Lakers by double digits at home.

Center Christian Wood led the Rockets in scoring against the Lakers on Sunday with 23 points on 10 of 20 shooting. John Wall and James Harden were the only other players with at least 10 points.

The Lakers have yet to lose a road game this year. All three of Los Angeles’ losses have come at home.

The Lakers are currently 5-0 on the road with two wins against Memphis, two wins against San Antonio, and Sunday night’s win against Houston. Their defense has been solid away from home, allowing 99.2 PPG in those five games.

Anthony Davis dominated Houston in the low post in the first meeting on Sunday. He went 9 of 12 from the floor and hit 9 of his 10 free throws to lead all scorers with 27 points.

Davis finished +29 as Houston didn’t have an answer for his size and athleticism. The early lead led to Davis and LeBron James only playing 30 minutes each, leading to three bench players finishing with at least 13 points.

James hasn’t missed a beat despite having less than three months off after the NBA Finals ended in mid-October. He has played in all 11 of the Lakers’ games to date, averaging 24.0 PG, 8.3 RPG, and 7.7 APG.

James is a little more turnover prone than usual (3.5 TPG), yet he is shooting well from the floor and making things happen for L.A.

Davis is averaging 22.9 PPG and 8.6 RPG while being a constant defensive presence in the paint. He is averaging 1.3 SPG and 1.6 BPG, as he looks to make the NBA All-Defensive First Team for the third time in four years.

Montrezl Harrell has allowed Davis to leave the low post and take advantage of mismatches. Harrell is third on the team with 8.0 RPG, and he is one of five players scoring in double digits with 12.9 PPG. He is shooting an impressive 60.8 percent from the floor, but that’s largely the result of shots close to the rim.