Nationally televised Western Conference action is back on NBATV this Tuesday night and the stage set for another great matchup between the Pelicans and Jazz, so VI is getting you ready with another slate of Best Bets and Game Previews to help handicap all the action.

The Jazz head into this game as a 6-point favorite over New Orleans, marking the 5th consecutive contest that Utah has been listed as the favorite in.

While the total for Tuesday’s contest currently sits at OU 218 – the lowest ‘over-under’ for a matchup containing either of these teams since January 6th. 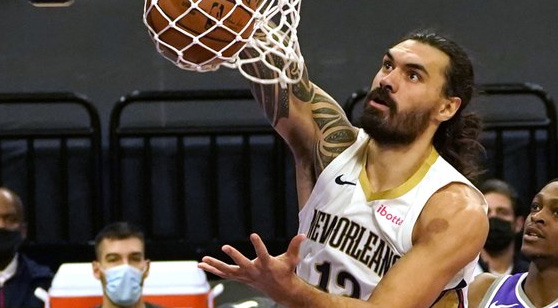 Steven Adams and the Pelicans will open a two-game road set at the Jazz on Tuesday from Salt Lake City. (AP)

The Jazz got off to a shaky 1-3 start to the season but since then have emphatically bounced back – winning seven of their last nine games and come into Tuesday night riding a five-game winning streak.

A huge part of Utah’s success can be attributed to their superstar, Donovan Mitchell, ramping up his efficiency since the turn of the new calendar year.

Mitchell failed to eclipse 45% shooting from the field in five consecutive games to start the season, but since then has shot at 45% or higher in six of his last eight contests and has scored 25+ points in four of his last five.

On the flip side, New Orleans finally got over the hump with a 5-point win over the Kings this past Sunday but prior to that, it was five straight losses for Zion Williamson and company – against questionable competition to say the least (Charlotte, Oklahoma City).

The Jazz took three of four contests against the Pelicans last year, with two of those wins coming by a 2-point margin and both teams racking up 120+ points in each of the first three matchups.

Brandon Ingram did everything in his power to push New Orleans over the edge against Utah last season – posting 33, 35, and 49-point performances across his first three matchups with the Jazz.

The final matchup between these teams was the first containing Zion, which consequently led to the only winning 'under' ticket in this series, 106-104.

The Pelicans come into Tuesday night as losers in seven of their last ten games, with their only victories across that stretch coming against the Thunder, Raptors, and Kings.

New Orleans ranked 4th in the league in pace last season (103.9), but ever since Williamson joined the starting lineup, the Pelicans have fallen all they way down to 26th when it comes to running the floor (98.3).

Currently sitting in 12th place in the Western Conference, the Pelicans have a ton of work to do if they intend to turn their season around, and it could potentially start with a statement win over the Jazz on Tuesday night.

The Jazz are rolling now, currently riding a five-game winning streak with an average final score margin of +16.2 across that stretch.

Utah played a tough stretch of matchups to kick off the season – matching up with the Suns, Clippers, Nets, and Blazers prior to their current winning streak.

But things didn’t get necessarily easier heading into the Jazz’ most recent five contests, as Utah just appears to just be playing all-around better basketball now that Mitchell is back on track offensively.

Former 2nd overall pick, Lonzo Ball, is a question mark to miss this contest while he nurses a knee issue.

Pelicans’ head coach, Stan Van Gundy, mentioned in an interview this past weekend that the guard could miss up to a week of time due to the injury, so look for Josh Hart to continue to fill Ball’s role in the starting lineup until he returns.

Ingram was relentless in his pursuit for a victory over the Jazz last season – racking up 30 or more points in each of his first three matchups with the Jazz, while dropping a 49-point bomb in the contest that the Pelicans finally won.

Ingram has eclipsed 22 points in 8 out of 12 games to start the season, with three of those ‘unders’ coming in contests decided by 15+ points.

I doubt that this matchup will be decided by more than 15. I’ll ride Ingram’s points ‘over’ here.

The Pelicans are sitting at 5-7 out of the gate to start the season – dropping games against the Hornets and Thunder to highlight New Orleans’ disappointing beginning to its new campaign.

While on the other hand, the Jazz just appear to be the hot team on the block right now, pummeling everybody within their path (L5, +16.2 point-margin).

The Pelicans haven’t fared well against playoff-caliber competition so far this year, currently owning a 2-5 record against teams that participated in last year’s post-season. I’ll lay the six points with Utah here.